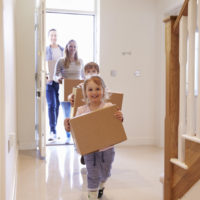 In April of last year, we described the Appellate Court’s decision in a case titled Taormina-Bisbing v. Bisbing. This case dealt with the standard that courts should use when determining whether to allow the primary custodial parent to relocate out of state with the couple’s children. After the Appellate Division ruled on the case, the losing parent chose to appeal the decision to the New Jersey Supreme Court, the state’s highest court. That court has recently issued its opinion, which establishes a new standard governing when a parent who shares custody may relocate out of state with their child.

The basic facts of Taormina-Bisbing v. Bisbing were that the mother wanted to move out of state with her new husband and the children for whom she held primary custody, but their father objected. The mother turned to the court for help. The trial court noted that when one parent has primary residential custody, they are permitted to move out of state with the kids so long as there is a good-faith reason and the move would not be “inimical to the child’s interests.” The Appellate Division reversed and ordered that the trial court hold a hearing on the issue, finding that the mother may have negotiated for primary custody (and, with it, a better chance of getting to move out of state with the kids) in bad faith, knowing already that she planned to move. The mother moved back to New Jersey with the children and appealed this decision.

In its August 8, 2017 opinion, the Supreme Court decided to abandon what had been the legal standard in New Jersey for allowing a parent with primary custody to move out of state. Courts will no longer use what was known as the Baures standard, asking whether the parent has a good-faith reason for the move and if the move would be counter to the child’s interests. The Supreme Court concluded that the Baures standard had been based on now-outdated research on the effect of relocation on children, as well as what had then been a trend of courts being liberal in allowing parents to relocate with children.

According to the decision, family courts should now use the same standard in any case where parents share custody of children, with no difference between cases where one parent holds primary custody or where parents hold equally-shared custody. Courts will now ask that all parents who wish to move with their children show that the move is in their child’s best interests. A “best interests” analysis will include consideration of factors such as the possibilities for visitation with the non-residential parent, the reasons for the move, and how any special needs the child has will be met in the new location. The court should also consider testimony from the parents on what they believe to be in their child’s best interests, as well as from persons close to the child, and in some cases, the children themselves. This change in the law should make it slightly more difficult, but not impossible, for a parent to move their child out of state while legally sharing custody with the co-parent.

If you’re facing a challenging family law issue in New Jersey, such as a custody dispute or divorce, get confident and capable legal help by contacting the Union family law attorney John B. D’Alessandro for a consultation at 908-964-0102.