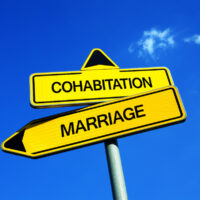 Last month we discussed a case in which the New Jersey Appellate Division refused even to open the door for a child custody evaluation absent a showing of changed circumstances sufficient to justify modifying a custody order. The Appellate Division just issued another “don’t put the cart before the horse” decision along the same lines, this time concerning modification of alimony. Read on for a discussion of how New Jersey courts will handle alimony modification and discovery of evidence, and contact an experienced New Jersey alimony, modification, and divorce attorney with any questions or for help with a New Jersey family law matter.

To seek discovery to prove cohabitation, a party must make a prima facie showing

To request a modification of an alimony order, a moving party must show that there has been a significant change in circumstances sufficient to warrant the change. The paying party may, for example, show that their financial situation has changed such that the current alimony arrangement is creating significant hardship. The party paying alimony can also reduce or stop paying alimony when the party receiving alimony begins cohabitating with a new romantic partner. New Jersey law does not want a husband to continue paying alimony to his ex-wife when she is financially supported by a new boyfriend or husband.

In the matter of Landau v. Landau, the plaintiff was paying alimony to his ex-wife, the defendant, under the marital settlement agreement incorporated into their judgment of divorce. Grounds for terminating alimony included death, remarriage, or cohabitation as defined by New Jersey law. Three years after the divorce, the plaintiff moved to terminate alimony based on the defendant’s cohabitation with a man she had allegedly been dating for over a year.

The plaintiff filed a certification in support of the motion alleging that the new man attended functions with the plaintiff, slept over at the house, traveled together, engaged in activities with the parties’ shared children, and that they publicly acknowledged the relationship on social media. The defendant countered that the man was simply her boyfriend, which does not amount to “cohabitation,” and that absent any evidence or allegation that the parties intertwined finances, shared a home, shared expenses, or other things that one would expect of a married couple, there was not even a prima facie showing of cohabitation. The court decided to allow discovery (i.e., the plaintiff could request and collect evidence from the defendant) of items such as financial statements and bills from both the defendant and her boyfriend in order to better inform his decision on the motion. The defendant appealed immediately to stop the discovery.

On appeal, the Appellate Division found that the plaintiff had not even made a prima facie showing (i.e., initial, base-level showing) that the defendant was cohabitating. Simply having a new boyfriend does not amount to cohabitation under New Jersey family law. Without such a showing, the plaintiff was not entitled to go on a fishing expedition by collecting discovery from the defendant in the hopes of proving cohabitation. The Division accordingly reversed the family court’s discovery order.

If you need compassionate, experienced, and talented legal help with a divorce or alimony modification dispute in New Jersey, contact the Union offices of family law attorney John B. D’Alessandro at 908-964-0102.