When Should You Sue for Domestic Violence? 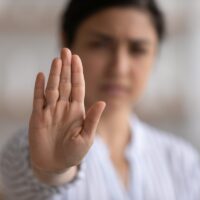 If you have experienced domestic violence or the threat of domestic violence in your home, you can go to a nearby county court and petition for a restraining order. If you fear for your safety or the safety of your children, it might be worth pursuing a restraining order. At a minimum, it’s important to get yourself and your family to a safe place and report your concerns to the authorities.

A TRO allows you to get immediate relief to protect your life, health, or well-being, or that of your family. You can petition the court to obtain a TRO effective immediately, even without the target of the restraining order present. A TRO will last until the hearing for the final restraining order, which should be scheduled within 10 days.

A restraining order can include a variety of provisions, including:

Raising domestic violence claims in court can also help you protect your children and obtain full custody. As noted, a restraining order can grant you temporary custody of your children to protect them from the perpetrator. You can take the matter further and file a claim for sole custody, raising the issue of domestic violence. You can also raise domestic violence in a divorce proceeding to support your argument for primary or sole custody. Courts will not allow a party to maintain custody if they pose a threat to the health or safety of a child.

In New Jersey, there’s an additional reason to sue for domestic violence: compensation. People who suffer injury as a result of the action of another person can file a personal injury claim for damages. Money damages are intended to compensate an injured victim for things like their medical bills, lost income due to time spent recovering from injury, and their pain and suffering and emotional distress.

If you’ve been subjected to actual or threatened domestic violence, or if you are dealing with issues involving child custody, equitable division of property, alimony/spousal support, child support, or other family law matters in New Jersey, contact the zealous and trial-ready Union family law attorney John B. D’Alessandro for a consultation.