When Can I Contest a Prenuptial Agreement? 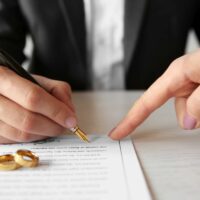 Prenuptial or premarital agreements have risen in popularity significantly over the past several decades. No longer the exclusive purview of the rich and famous, prenups can provide security for marrying couples who come from any economic level. We strongly encourage every couple to at least consider entering a prenup before marriage. That being said, some prenups are blatantly unfair to one spouse and should not be enforced. In this article, we discuss how a party can contest a prenuptial agreement that leaves them high and dry in a divorce. If you are concerned about a prenuptial agreement or you are facing divorce, reach out to a savvy and trial-ready New Jersey premarital agreement attorney.

Grounds for Contesting a Prenup

The principal grounds for contesting a prenuptial agreement rely on invalidating either the agreement itself or specific terms within the agreement. A prenup may be thrown out in whole or in part because of the following reasons, among others:

Get Help Challenging a Premarital Agreement in New Jersey

If you need seasoned legal help with prenuptial agreements, divorce, child support, alimony, or other family law matters in New Jersey, contact the Union offices of family law attorney John B. D’Alessandro at 908-964-0102.