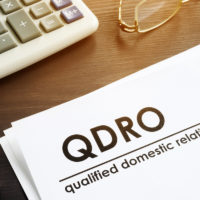 A recent unpublished decision from a New Jersey appeals court is a reminder of the importance of entering a QDRO at the same time as a divorce decree in order to avoid later headaches and end up losing out on more of your pension than you anticipated. Continue reading for details on the case and how New Jersey calculates child support amounts, and contact a seasoned New Jersey retirement asset division attorney with any questions.

What is a QDRO?

A Qualified Domestic Relations Order (QDRO) is a judicial order that is entered as part of a property division in a divorce proceeding. The QDRO splits a retirement or pension plan by establishing an alternate payee, allowing a former spouse to distribute a retirement plan without tax or penalty. Without a QDRO, if you withdrew funds early from a retirement plan you would owe a 10% early withdrawal fee. The QDRO permits the spouse to receive an established portion of the pension in accordance with the parties’ agreements and judicial input.

Absence of a QDRO creates difficulties for long-divorced couple

The case of Tapanes v. Perez concerned the division of a pension belonging to Juan, the husband, in his 1993 divorce from his wife, Teresa. Pursuant to the parties’ divorce settlement agreement, Teresa was entitled to receive 50% of the value of Juan’s pension from the date of the marriage to the date of the filing of the divorce complaint. The settlement further provided that in the event of Juan’s death or separation from the pension plan other than early retirement, whereupon Juan would receive a lump sum payment equal to his contributions to the pension plan, Teresa would receive an amount in accordance with the valuation conducted as part of the divorce rather than 50% of the contributions.

In 2010, Juan retired and began drawing on the pension without informing Teresa and without entering a QDRO. In 2017, Teresa contacted Juan about preparing a QDRO and retained an expert to do so. The expert drafted a QDRO in accordance with the settlement, which included a portion of the pension benefits Juan had been receiving in full for the prior seven years as arrears. After Juan failed to respond, Teresa filed a motion in court to compel Juan to sign the QDRO. Juan failed to respond again, and the court entered the QDRO. Only then did Juan object.

Juan later filed a motion to vacate the QDRO, claiming that Teresa should only have received an amount equal to half of Juan’s contributions to the pension during the marriage. He specifically objected to the arrears owed for the seven years he was paid after taking early retirement. The court disagreed.

On appeal, the court found that Juan had failed to properly object to or appeal the QDRO itself or the order compelling him to sign it. Moreover, the QDRO as entered, including the arrears, did not contradict the marital settlement agreement.

If Juan had worked with an attorney and with Teresa to collaboratively draft a QDRO at an earlier date, then he might have had more input in the amount ultimately awarded by the order. Because he failed to participate and failed to timely object, the QDRO stood. Likewise, entering a QDRO at the time of the divorce would have saved Teresa the need for lengthy and combative court proceedings over 20 years after the divorce was finalized. Notably, the court denied her motion for an award of attorney fees for costs associated with the court proceedings.

If you’re in need of compassionate, experienced, and talented legal help with a divorce or property division dispute in New Jersey, contact the Union offices of family law attorney John B. D’Alessandro at 908-964-0102.