What Happens to the House if a Spouse Dies During Divorce in New Jersey? 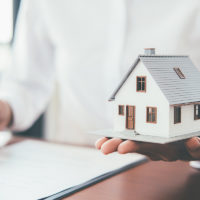 Divorces tend to be complex and emotionally-charged at the best of times. They are never convenient. Determining the equitable division of property, in particular, is a difficult process, especially when the divorce is contentious. The New Jersey Appellate Division recently fielded a case with an unusual complication added to the mix: What happens to shared assets when one party dies in the middle of the divorce proceedings? Does the divorce continue, limiting the assets received by the surviving spouse to those that would have been awarded as part of the final divorce judgment? Or should the divorce be dismissed, such that the surviving spouse inherits the estate of their now-deceased spouse? Read on for details on the case and how New Jersey courts handle deaths during divorce, and contact an experienced New Jersey property division attorney with any questions.

The case entitled Acosta-Santana v. Santana concerned a couple in the midst of a divorce. The parties were married for 25 years when they filed for divorce in September 2015. On June 3, 2016, the defendant-husband executed a last will and testament dividing his estate into equal shares for the three children the parties shared, and directed that if his children predeceased him, his entire estate would go to his brother and sister-in-law. On October 28, 2016, before the entry of a final judgment of divorce, the defendant passed away.

The executor of the husband’s estate then filed a motion to interplead in the divorce action and replace the husband as defendant. The plaintiff filed a motion for summary judgment to dismiss the divorce action. Getting rid of the divorce action would ensure that she would inherit more than double the portion of her deceased husband’s estate that she would have received as part of the divorce judgment. The executor emphasized that the deceased husband “was always very clear that he did not want his share of assets to be acquired by plaintiff, but to be left directly to his children.” The trial court ruled for the plaintiff and granted summary judgment.

The appellate court agreed based on the “well-established New Jersey law that absent exceptional circumstances, divorce proceedings abate with the death of one of the parties.” Further, “equitable distribution of marital assets occurs only upon the adjudication of divorce” absent “highly unusual circumstances” such as fraud. Death of a spouse is not such a circumstance. The equitable division calculus was still ongoing when the defendant died, meaning not all issues were fully adjudicated while he was alive.

According to the Appellate Division, the case was unlike the New Jersey Supreme Court’s previous opinion on the matter which involved a wife who would have received nothing had the matter switched from divorce to probate, and thus the principles of equity demanded they let the court continue. Here, there were no such unusual circumstances, and even if the defendant expressed a desire different than this eventual outcome, the plaintiff was not being “unjustly enriched” as a result of fraud or misrepresentation. Rather, it was just the luck of timing.

The New Jersey Supreme Court recently rejected a petition for certification on the issue, so the appellate division’s determination is final. The opinion is, however, unpublished, so it serves only as an illustration of how courts might resolve the issue rather than as binding precedent.

If you’re in need of compassionate, dedicated, and experienced legal help with property division, custody, divorce, or any other family law matter in New Jersey, contact the Union offices of family law attorney John B. D’Alessandro at 908-964-0102.