What Happens if I Do Not Pay Child Support in NJ? 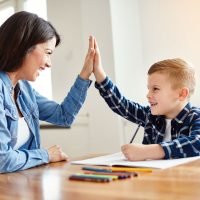 How Is Child Support Calculated in NJ?

In New Jersey, child support payment is calculated by defining the net income of both parents and determining how much time one parent spends with a child. Additionally, the court may also consider additional expenses a parent might face when calculating child support payments.

With these factors in mind, child support payments to the custodial parent (the parent who has physical custody of the child) will be determined.

Once child support payment is calculated, the amount of payment can be adjusted or modified in the future if one parent were to lose or gain sources of income.

As part of the child support agreement, specified dates of when payment is to be made, and consequences of non-payment or partial payment are outlined so that both parties know what the expectation is.

If one parent fails to pay their weekly amount of child support, the next week’s payment will also include the overdue payment from the previous week. In some cases, a fine or arrearage of $10 may also be added to the latest payment.

There are instances where both parents will agree to a modification of child support. When this happens, the updated agreement can apply retroactively under the following conditions:

The short-term consequences of unpaid child support can often be resolved quickly and without causing further issues for the non-custodial parent. However, if one parent becomes consistently late in paying their child’s support, these short-term consequences can quickly snowball into bigger issues. In some cases, one parent may flat-out refuse to make their child support payments. When this happens, the other party has legal options they can lean into.

A parent who is consistently behind on their child support payment or flat-out refuses to make payments can face many consequences that can have long-lasting impacts. For parents who refuse to make their child support payments, the consequences will understandably be more severe than for parents who cannot afford the payments due to loss of income. In those cases, modification of the agreement may be necessary.

New Jersey Law imposes a number of consequences for individuals who do not make their child support payment. The severity of the consequences range, but they include any of the actions below:

Withholding Wages – This is often done through wage garnishment. Employers can be legally empowered through the courts to deduct a set amount of the worker’s wages. Those earnings will then be sent to the New Jersey Family Support Center to be distributed to the party that is owed child support. The amount in garnished wages is calculated by the court.

Withholding Tax Refund – New Jersey state law also allows the garnishment of tax refunds as well. The garnishments can be from both state and federal tax returns.

Suspension of a Driver’s License and Other Licenses – In cases where a parent fails to pay child support for six months or more, that parent may have their driver’s license or professional license revoked. This includes licenses pertaining to work as well as recreational licenses. A court hearing will determine if any licenses will be suspended, revoked, or denied.

Suspension of Passport – If a party owes $2,500 or more in arrears, then they will be restricted from applying for a passport or renewing a passport if they already have one.

Reflection on Credit Reporting – Not making child support payments can also impact an individual’s credit report. For parents that owe $1,000 or more in arrears, their non-payment will be reported to all three major credit reporting bureaus.

Issuance of a Bench Warrant – In cases where a parent is intentionally not making child support payments and fails to appear in court, the court may issue a bench warrant for their arrest.

Asset Seizures – If a parent is purposefully not making their child support payments, under New Jersey Law the child support office may be able to seize the assets of that parent. This can be through monetary amounts in a bank account or assets saved in stocks and bonds.

If a party is having difficulty making child support payments, they can petition the courts for a modification of child support. Modifications of child support agreements occur for a variety of reasons but are often requested when the non-custodial parent has experienced a major life change like a loss of income.

Speak With a Divorce Lawyer

Working with an experienced divorce lawyer can help you navigate child support agreements, modifications to agreements, and any other issues that relate to child support payment. At the Law Offices of John B. D’Alessandro, LLC, our dedicated and experienced family attorney will fight for your right as a custodial or non-custodial parent. Contact us today to schedule a consultation on your case.