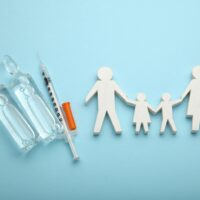 As the coronavirus continues to spread, many divorced co-parents may be concerned about their children’s health and safety and the decision-making capacity of each parent. In New Jersey, custody arrangements can be modified and parental rights adjusted if one parent is acting in a manner that endangers the health of a shared child. One issue that may arise after the divorce is whether to vaccinate young children, especially when one parent objects to vaccination based on religious or vaccine safety concerns. Read on for a discussion of vaccine-related issues that may arise and how New Jersey family courts tend to respond. Speak with a knowledgeable and compassionate New Jersey child custody and parental rights lawyer if you have any questions or for help with a New Jersey custody dispute.

In a case titled New Jersey Div. of Child Prot. & Permanency v. J.B., the New Jersey Appellate Division addressed whether the Department of Child Protection & Permanency (DCP&P) can force parents to vaccinate their children over the parents’ objection. During an investigation of the familial home at issue in the case, the DCP&P found evidence of neglect and risk of abuse. DCP&P learned from the children’s doctors that the children had not been vaccinated and that the parents had cited their religious views as the reason for refusing vaccination.

At trial, based on the state of the home and the fitness of the parents, the court granted DCP&P custody of the children. The court also permitted DCP&P to vaccinate the children. The parents appealed, arguing that state law allowed religious exemption from immunization, specifically concerning schools mandating vaccination for young students. The appellate court upheld the family court’s decision, finding that the parents’ decision to refuse medical treatment for their children could be overridden where necessary to prevent harm to the children. Even though there was a law granting a religious exemption, the law the parents cited pertained only to school attendance, not to a DCP&P intervention.

What if my ex decides against vaccinating our children?

If your ex has shared or sole legal custody of your children and decides against vaccination, you may be able to argue that their actions put your children in danger. Custody determinations can be modified if the moving party shows a change in circumstances sufficient to warrant the change. If a parent learns for the first time that their co-parent refuses to vaccinate, or if the co-parent changes their mind on vaccination after the divorce and decides against it, the other parent may be able to use that new circumstance as grounds for modification of custody. A dedicated New Jersey child custody lawyer can help you understand New Jersey law on child custody and child endangerment and evaluate whether you may have grounds to modify your custody arrangement.

If you’re in need of talented, effective, and compassionate legal help with child custody, alimony, or other family law matters in New Jersey, contact the Union offices of family law attorney John B. D’Alessandro at 908-964-0102.