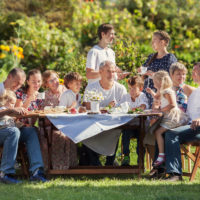 Evolving social norms and the definition of a “family” are leading to new developments in family law, designed to accommodate arrangements that were not around in the U.S. before now. One issue that has been cropping up around the country: What is the proper arrangement for the purposes of child custody, child support, legal decision-making, etc., where it appears that there are three parents who each have legitimate claims to be the legal parent of a child? A few states have passed statutes providing for “third” legal parents depending on the situation, but the majority are simply addressing these cases as they come. A recent New Jersey case illustrates how courts have been handling tri-parenting when it comes up.

New Jersey Court Exercises Tri-Parenting in favor of third “psychological” parent with custody rights, but not as a legal parent

The case of D.G. v. K.S. dealt with an unusual situation: Three close friends decided to conceive and jointly raise a child. The parties were the biological mother (M), the biological father (BF), and the biological father’s husband (3P, for third parent). Using the BF’s sperm, the parties artificially inseminated M, who gave birth to a daughter in 2009. The parties did not put any custody arrangement in writing, and parenting time fluctuated; BF and 3P tended to take primary care over the summers while M worked, and during the winter M often took the daughter to her second home in Costa Rica with the consent of the fathers.

Ultimately, the court found that 3P was a “psychological parent” to the child and that it would be against the child’s best interests to separate the two. Under this doctrine, a third person who has acted as a parent to a child (lived in the same household as the child, assumed parental obligations such as caretaking and education) for a significant length of time, with the parents’ consent, can obtain some parental rights.The court ruled that custody should be shared among all three parents and rejected the mother’s bid to move to California. Based on the best-interest factors including home stability and financial resources, the court ruled that custody would be split 50-50 between M on the one hand and the fathers on the other.

However, despite the custody arrangement, the court ruled that 3P could not be declared a parent as a matter of law. The court stated that the legislature must pass a law permitting tri-parenting officially for the court to declare 3P a legal parent.

Courts across the U.S. have been dealing with a variety of situations that have led to “tri-parent” findings. California passed a law in 2013 allowing for more than two people to be “legal” parents as long as they all fulfill the traditional requirements for a presumption of parentage; e.g., if one father is married to the mother, and another father raises the child and holds himself out as the father. Courts in Alaska and Oregon have allowed third parent adoption in some circumstances, but have denied it in others. Other states have ruled similarly to New Jersey, finding some parenting rights but not going so far as allowing three full legal parents.

If you are considering divorce or are facing a more complex custody battle involving tri-parenting and need experienced legal help, contact New Jersey family law attorney John B. D’Alessandro for a consultation on your case, in Union at 908-964-0102.