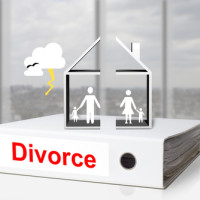 The impact of Superstorm Sandy on New Jersey residents was and continues to be far-reaching. In a case before the Appellate Division of the New Jersey Superior Court titled Goodreau v. Casella, the court examined how the effects of the massively-destructive storm should impact one couple’s post-divorce division of property.

John Casella and Doris Goodreau (formerly Casella) divorced in December of 2010. Their final judgment of divorce included a requirement that the family home be sold, with a portion of the proceeds first going toward the balance owed on the home as well as other debts accrued by the couple, with anything that remained being divided 60/40 between John and Doris, respectively. The court also ordered the sale of the couple’s timeshare, with proceeds to be divided equally between the former spouses. John was ordered to pay weekly alimony toward Doris, but until the home sold, Doris was required to contribute to the cost of repairing the home’s roof with weekly contributions that temporarily reduced John’s alimony obligation.

Superstorm Sandy arrived on October 29, 2012, throwing a wrench into the home’s scheduled sale date at the end of October. The home suffered extensive damage and forced both spouses to move into temporary housing. During the months prior to the sale, John had paid some of Doris’ bills, offered her assistance with a rent payment, and paid more than what the court had ordered from the homeowners’ flood insurance proceeds. When the home sold in December of 2012, John then became obligated to pay the full amount of the ordered weekly alimony payment to Doris, but he failed to do so.

Doris later moved to enforce the divorce judgment and recover the arrears in alimony she was owed. She requested that the funds being held in escrow from the sale of their home be released to her to satisfy the alimony arrears. John objected to Doris’ requests, arguing that he deserved credit for the additional, non-obligatory payments he made to Doris against these amounts she claimed he owed in alimony, and that the money held in escrow from the home sale was intended for satisfaction of marital credit card debt. Aside from giving credit against the alimony arrears for a tax payment and the overpayment from the flood insurance arrears, the trial court agreed with Doris and granted her requests. John appealed, arguing that the effects of Superstorm Sandy on his salon business warranted a factual hearing to reassess his alimony obligation, that he should receive greater credit against his alimony arrears for the assistance he offered Doris, and that he was being unfairly saddled with the couple’s credit card debt by ordering that the escrowed funds be released to pay Doris’ alimony.

The Appellate Panel agreed with certain of John’s arguments. The court on appeal determined that, if Doris were to receive the funds intended for payment of debts the couple accrued together, she would be unfairly burdening John with payment of 100% of those debts, despite the fact that she was partially responsible for accruing them. However, the court rejected John’s request for greater credit against his alimony arrears, finding that John had made the additional assistance payments to Doris through his salon business, meaning he received a tax benefit for the help. Offering him an additional credit against alimony owed would mean giving him twice as much credit. Finally, the court disagreed that the effects of Superstorm Sandy on John’s salon business warranted a hearing to modify the alimony he owed, having determined based on financial records that John continued to go into work on a daily basis and maintain two employees, and that the dip in business after Sandy would not be permanent.

If you are seeking enforcement of a divorce judgment or modification of alimony, contact experienced Union divorce and family law attorney John B. D’Alessandro for a consultation at 908-964-0102.