Separation and How It Differs From Divorce 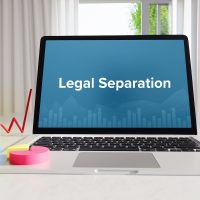 Divorce is final. It’s a big step, and for many couples struggling with their marriage, it may feel like a step too far. For couples who need to take a step back from the marriage but are not yet ready to divorce, there’s a middle-ground option: Separation. Parties who separate can later reconcile, or should the separation prove to be the right choice, they can proceed with a divorce. Separation can take a couple of forms in New Jersey. Read on to learn about how separation works in New Jersey, and if you are considering separation or divorce, call a knowledgeable New Jersey legal separation attorney for advice and representation.

To obtain a divorce, one spouse needs to file a complaint in family court and start the legal divorce process. Depending upon the nature of the parties’ relationship, including whether or not they can quickly reach a settlement on all contested issues, divorce may involve months or years of litigation. The parties will need to request and provide evidence, negotiate the division of property, child custody, and other matters, and ultimately get a final order from the court setting the terms of the divorce and dissolving the marriage.

Separation is much easier and much less formal. There’s no need to go to court. Unlike some states, New Jersey has no formal process for “legal separation.” Rather, the parties simply choose to live apart and act as if they are separated.

A separation agreement can be used to establish financial rights and responsibilities as well as decide upon custody matters, including:

Once signed and notarized, the separation agreement has the force of any contract. If a party breaches the contract, they can be sued for damages. If the parties cannot agree on financial support or child custody, they can still go to court to get a custody or support order, even without obtaining a full divorce. Separation agreements are often used as a foundation for divorce settlement agreements should the parties later divorce.

Obtaining a divorce from bed and board is similar to obtaining a full divorce: The parties go to court, allege the same grounds as they would for a normal divorce (irreconcilable differences), and seek relief regarding child custody, property division, and other divorce-attendant matters. The court will issue an order granting the relief sought, but the parties will remain legally married.

The principal difference between separation and divorce is the different legal effect each carries. Divorce results in a final dissolution of the marriage. After a divorce is concluded, the parties are no longer married and no longer profit from any of the legal benefits of marriage–insurance coverage, inheritance, taxes, etc. When you are separated or when you obtain a divorce from bed and board, however, the marriage remains active.

With a separation agreement, as discussed above, you can dictate certain financial and familial matters. You and your spouse will, however, remain married. You can still benefit from any legal or contractual rights attendant to marriage, such as remaining on your spouse’s insurance plan or making medical decisions should they fall ill. You will not be able to marry someone else until you go through a proper divorce.

Because divorce results in a final dissolution of the marriage, reconciling after divorce is much more involved than after separation. If the parties wish to be married, they will have to remarry.

Get Dedicated Legal Help With Your New Jersey Separation or Divorce