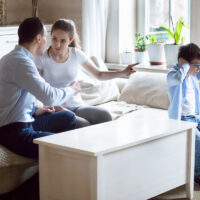 Child custody is often one of the most heated and contested issues that arise during a divorce.  Each parent has certain rights concerning custody, visitation, and child support, and these are the issues that divorcing parties generally find most difficult to agree upon.  These issues could be even more complicated if the parties were never married to begin with.  What rights does each parent have if a child was born out of wedlock?  Are putative fathers given fewer rights outside of marriage than they would have had the child been born to married parents?  Read on for a discussion of parental rights for unmarried parents in New Jersey, and reach out to a dedicated New Jersey child custody lawyer for help with a New Jersey family law matter.

The biggest difference between parental rights when a child is born into a marriage vs. born outside of marriage is the father’s legal status as a parent.  A man who is married to the mother will be presumed to be the father upon the birth of the child.  If the parents are unmarried, then either the putative father or mother must take additional steps to establish paternity.

If the parties agree on the identity of the father, the parents can sign a Certificate of Parentage at the hospital or later at a county registrar or welfare office.  If paternity is challenged, then either the father or mother must go to court to seek an order establishing paternity.  Typically, the court will permit or order genetic testing to determine paternity, and the judge may look to other evidence proving or disproving paternity as well.  Once the court has issued an order establishing paternity, the putative father will be the child’s legal parent, with all attendant rights and responsibilities.

Custody is the same for unmarried and married parents

Once paternity is established, the putative father gains all legal rights he would have had had the parties been married or paternity established at birth.  Now that both parties are the legal parents of the child or children, any disputes over custody, visitation, or child support are treated in basically the same manner as if the parties had been married and were now divorcing.  If the parties are disputing custody, they can negotiate a parenting plan establishing custody, visitation, and other issues.  If they reach an agreement, that agreement can become enforceable, just like a divorcing couples’ divorce settlement.

If the parties cannot reach an agreement, then, just like in a divorce, they must go to court.  Your family law attorney can help you file the appropriate action in a New Jersey court.  The court will then apply the same reasoning to resolve the various issues as if the custody dispute arose in a divorce.  The court will focus its analysis on the “best interests of the child” standard, evaluating the physical, emotional, and financial well-being of any children that are the subject of the dispute.  New Jersey courts start with the presumption that the children will benefit most from continued contact with both parents and will generally avoid limiting one parent’s access to the child unless there are concerns over the child’s well-being and safety, such as if criminal behavior, drug abuse, or domestic violence are involved.

If you’re in need of dedicated, compassionate, and effective legal help with child custody, child support, or other family law matters in New Jersey, contact the Union offices of family law attorney John B. D’Alessandro at 908-964-0102.