Can I Renegotiate a Prenup Mid-Marriage? 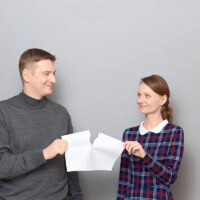 Prenuptial agreements are generally enforceable so long as they are valid and voluntarily entered into. A valid prenup will only be thrown out by a court if the agreement is held to be unconscionable as a matter of law, which is a demanding standard to reach. Prenups are, however, a private contract between counterparties, which means that the parties can voluntarily set them aside.

It is easy to see how a prenup may seem ideal at the start of a marriage, but 10 or 15 years later, the continued existence of the document begins to feel like a wedge between the parties. Or there may be a change in financial circumstances, such as an unexpected inheritance, that changes the parties’ understanding of their finances. Whatever the reason, many prenups include a provision that allows parties to renegotiate the terms of the agreement provided that the revised contract is entered into with the same level of voluntariness and legal formality as was the original prenup.

Even without such a clause, the prenup was a private contract between voluntary parties, and it can likely be modified so long as all legal formalities are met, and no public policy reasons prohibit the modification (such as if the new version leaves one party with nothing, when the original prenup, in contrast, gave them a significant portion of the marital property as well as alimony). Formalities include review by each party’s independent legal counsel, an absence of coercion, and an absence of fraud or hiding of assets.

If the parties are experiencing marital troubles, it is possible that renegotiating a prenup can reinvigorate the relationship and provide an added element of trust that has become lacking. Voluntary renegotiation is certainly much easier than seeking to hold an existing prenuptial agreement unenforceable. Talk to your family law attorney about whether a renegotiation is in your best interests, given your circumstances, your relationship, and the terms of your existing agreement.

Help With Your New Jersey Divorce and Family Law Needs