Divorce Mediation Is Not Always Binding 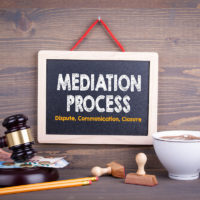 Traditional courtroom divorces can be expensive, exhausting, combative, and long-lasting. Rather than subject themselves to the stress and strain of traditional divorce, many couples now explore divorce alternatives such as arbitration and . While these alternatives can provide a more amicable path to ending a marriage and dividing assets, couples must keep in mind that not all outcomes of courtroom divorce alternatives have the same legal effect. One recent opinion issued by the New Jersey Appellate Division illustrates the legal effects of decisions made in non-binding mediation. Learn about the case below, and contact an experienced New Jersey family law attorney to discuss how to handle your divorce.

The case titled Mathurin v. Mathurin centered on a couple that had divorced in October 2015. As agreed to in their Matrimonial Settlement Agreement (MSA), the couple listed their jointly-owned home for sale and received an offer that the husband was willing to accept. The wife offered instead to buy the husband out for the amount he would have received had the couple accepted the offer they received. The husband refused and filed a motion requesting that the couple’s MSA be enforced, requiring that the residence be listed for sale. Per a term in the couple’s MSA, however, the couple was required to try to negotiate between themselves or seek the help of a mediator before turning to the court to resolve their dispute.

Husband Rejects Results of Mediation After the Session Concludes

The couple attended mediation, as ordered, but only the mediator signed the memo that summarized the results of the mediation. The wife asserted that the couple had reached an agreement allowing her to buy out her husband’s share of the home. When the husband’s lawyer asked the husband to sign a document that would make the decisions reached in the mediation session legally-binding, he refused, explaining that he objected to certain terms they had reached. After hiring a new lawyer, the husband again filed a motion to enforce the MSA and list the marital residence for sale.

Without a Signed Agreement, Divorce Mediation Decision Is Unenforceable

The wife objected and argued that the results of the mediation, as outlined in the mediator’s memo, should instead be enforced. The trial court judge ordered that the MSA be enforced and refused to enforce the memo, and the wife appealed. The Appellate Division upheld the trial court decision and enforced the MSA. The wife had argued that, since the mediation memo included language stating that it “reflects the settlement agreement between the parties” and that the “parties agree that it represents an enforceable settlement agreement,” the terms included in the memo should be enforced. However, the court noted, the husband never signed the mediator’s memo, and since mediation sessions are supposed to be entirely private, the court should not be permitted to review the memo written by the mediator. The Appellate Division’s opinion explained that agreements reached in mediation are only enforceable in court when both parties have signed a document that clearly lays out the terms of the agreement they reached in mediation. Since the mediation memo was not signed by the husband and should have in fact remained confidential, the court was obligated to enforce the MSA instead.

If you need seasoned, skilled help with your New Jersey divorce or custody dispute, contact the Union offices of John B. D’Alessandro at 908-964-0102.