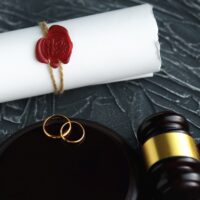 Historically, prenuptial agreements were seen as the exclusive purview of the rich and famous, at best. At worst, they were seen as unromantic money-grubbing, evidence that one or both partners were unsure about the marriage. These views are simply no longer accurate, if they ever were. In modern times, prenuptial agreements can be valuable tools for many couples planning to marry, regardless of their finances and familial circumstances. They can provide a number of benefits to both parties, rather than simply protecting the wealthier or higher-earning spouse. Below, we discuss several of the important benefits that prenups can provide. If you are considering a prenup before your upcoming marriage, talk to a seasoned New Jersey premarital agreement lawyer for advice and representation.

Save Time and Money Down the Line

A prenuptial agreement can lay the foundation for an eventual divorce settlement agreement. Rather than having to go through a lengthy court battle with multiple hearings and settlement sessions, you can preemptively resolve many of the issues that might arise in the event of divorce. In New Jersey your prenup can address, among other things:

Prenups cannot preemptively decide matters regarding child custody or child support, but they can cover just about all other financial matters relating to the marriage.

If you or your spouse have children from prior marriages or relationships, a prenup can help ensure that your children’s interests are protected. By protecting certain assets, or setting up contingencies such as inheritance, trusts, insurance policies, and other items, a prenup can be used to ensure that pre-existing kids are not left in the cold after a subsequent divorce.

A small or family-owned business can wind up in jeopardy as a result of the owner’s divorce. If the business grew significantly during the marriage, but it is primarily owned or managed by one spouse, the other spouse has a right to a portion of that business’s value. Without a prenup, there may be a complicated battle over who walks away with what percentage of the business, which can create havoc with customers, business partners, shareholder confidence, and other issues. A prenup can be used to ensure that the non-owner spouse receives fair compensation for the value of the business while eliminating the risk that the business itself becomes a matter of contention.

Protect Your Family Heirlooms and Other Valued Assets

Not all marital assets have a definable dollar value, or at least a dollar value that accurately represents the value of the item to you personally. An old chess set from your father, a treasured scarf from your grandma, or even the old family station wagon may be worth much more to you than its market value would dictate. Even your pets can be reduced to a dollar value that in no way reflects how much they matter to you.

These assets can easily get swept up in the divorce, distributed between the parties according to their market value instead of their personal value. With a prenuptial agreement, you and your partner can agree ahead of time on who would get certain items in the divorce. This saves time and emotional energy down the line, preempting unnecessary fights or keeping angry spouses from deliberately fighting for items they know their ex cares about.

If you’re considering a prenuptial agreement or dealing with divorce, child custody, child support, alimony, or other family law issues in New Jersey, contact the seasoned and professional Union family law attorney John B. D’Alessandro for a consultation.