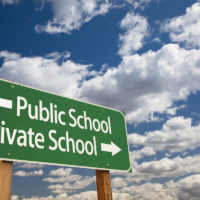 In the case of LBG v. JPG, mom wanted son to attend private Catholic high school, but dad was not keen on the idea. Dad filed a motion in court to make mom bear the full cost of tuition. Mom opposed the motion and filed her own cross-motion to prohibit dad from making disparaging remarks about parochial schools. The family court granted dad’s motion and denied mom’s. On appeal, the appellate division of the New Jersey Superior Court partly affirmed and partly reversed the family court, sending the case back down for a full hearing.

The couple in this case were married in 1997, had a son in 1999, and divorced in 2005. The property settlement agreement in the divorce gave mom primary custody of the son and sole responsibility for financial support until 2007. This agreement was later amended in 2008, with dad agreeing to pay $490 per week in child support.

The son attended public school until 2012, when he transferred to Catholic middle school to escape bullying. Dad was Catholic himself, and much of his family were products of the parochial school system, but he nevertheless opposed the transfer. So when mom moved to put son into private school, dad’s first reaction was to ask the court to prevent the enrollment, or at least to absolve dad of any obligation to contribute to the cost.

The trial court hearing the motions did not find that the private school had any advantage over the public school, or vice versa. The court therefore denied dad’s motion to stop the transfer, but did grant the motion which would make mom cover all of the tuition. As to mom’s cross-motion, the judge said there wasn’t any evidence that dad had disparaged parochial schools and therefore refused to enter an injunction against him to prevent him from possibly doing so.

Appeals Court Sends Case Back for a Full Hearing

An appeals court normally defers to the conclusions of the trial judge who heard live testimony. Here, however, the court hearing the motion apparently did not hear any live testimony but just decided the case on the briefs submitted by the parties. The appellate court found there were several disputed factual issues which should have been addressed in a full (plenary) hearing, such as whether the parties had an agreement on tuition or not. Also, the trial court failed to apply the 14-factor test set out in Hoefers v. Jones (1994) to decide motions to compel payment of private school tuition.

The appellate court sent the case back down to the trial court for a full hearing. The 14 factors from the Hoefers test are as follows: