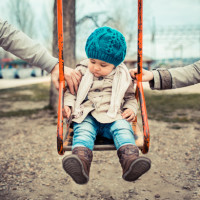 A New Jersey court recently had occasion to decide an issue regarding a state law allowing the state to report people in arrears on their child support payments to credit reporting agencies. The court in Cameron v. Cameron decided that the law applies in cases where a parent has failed to comply with an existing order for child support, but it does not apply in the case where the arrears are due to an order for support being suddenly increased or retroactively imposed.

The law at issue is N.J.S.A. 2A:17-56.21. This statute says the State child support agency has the authority to make available the name of any delinquent obligor and the amount of overdue support owed by the obligor to credit reporting agencies, also known as credit bureaus, such as Experian, TransUnion and Equifax. Although the law doesn’t say so, the state has adopted the practice of only notifying credit reporting agencies when a delinquent payor owes more than $1,000.

The couple in the case of Cameron v. Cameron divorced in 2008 after a long-term relationship and a three-year marriage. The parties assumed joint legal custody of their child, with the plaintiff taking primary physical custody and the defendant paying $75 per week in child support. In July 2014, the parents switched roles as to primary and noncustodial parent. In November of that year, the court ordered that the plaintiff start paying child support to the defendant. The judge made this ruling retroactive to July, which made the plaintiff automatically in arrears to the defendant by $1499. The plaintiff agreed with the court’s decision to allow the plaintiff to pay off the arrears in monthly installments over time, but the plaintiff was concerned about being reported to credit agencies because of the arrears.

These facts led the court to closely examine the question, Does the statute require reporting a technical arrearage where the parent has never actually violated a support order or missed a payment? The answer, thankfully, was no. After reviewing various state publications interpreting the law, such as Credit Reporting of Child Support Debts, A Lawyers Guide to Child Support Services in New Jersey and
New Jersey Automated Child Support Enforcement System, the court decided that the purpose of the law is clearly meant to address the problem of delinquent obligors; in other words, people who have missed payments and are behind in their payments. “Owing support” and being “delinquent on support” are not the same thing, and just because a person suddenly owes a large amount of support, if that person has not missed a payment, then he or she is not delinquent and should not be reported to the credit reporting agencies.