Court Finds No Cohabitation for Couple Sharing a Home 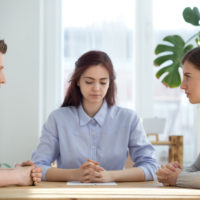 New Jersey law dictates that agreements to pay alimony may be terminated or suspended if the paying spouse can prove “changed circumstances,” such as that the alimony-receiving spouse has begun cohabiting with a romantic partner. Proving “cohabitation” as defined under the law, however, isn’t as straightforward as showing that the spouse shares a home with a new boyfriend or girlfriend. In a recent Appellate Division case, a husband and alimony payor spent tens of thousands of dollars on surveillance in an effort to show that his former wife was living with her boyfriend, only to have his motion to terminate alimony denied. Learn more about the case below, and contact a seasoned New Jersey alimony lawyer for more information.

The recent case is titled M.M. v. J.Y. and centers on a couple who separated in 2008 and divorced in 2013. The couple’s Dual Judgment of Divorce (DJOD) stated that the husband would pay the wife $500 per month in alimony for five years. The couple had one child together, pseudonymously referred to as “John” by the court. Several years after the married couple’s separation, the wife began a relationship with another man, referred to by the court as “Pat.” These two had a child together in 2013, “Anne.” When Anne was born, Pat began spending more time at the wife’s house.

The husband heard rumors of the birth of Anne. In 2016, the husband paid for an investigation to gather evidence that Pat was living with his former wife, which entailed an investigator taking thousands of pictures of the wife’s home and backyard and a cell phone expert examining Pat’s cell phone records. At a hearing supporting the motion that the husband filed to suspend or terminate alimony, the investigator testified that Pat was often found helping with outdoor chores, entering and leaving the house freely, taking John to school in the morning, and spending “almost every night” at the wife’s house. The cell phone expert testified that 29% of Pat’s cell phone usage originated at the wife’s house. The evidence presented at the hearing also included a tape recording where the husband questioned John about his half-sister Anne, despite having already learned about the little girl from his private investigator.

The wife and Pat also testified at this hearing. The wife admitted that Pat often took John and Anne to school or daycare but said that she rented her home from her parents with no help from Pat in paying rent. She also testified that she did not share any checking or savings accounts with Pat, nor any credit cards. The wife was reluctant to answer questions about her daughter, and the judge found both Pat and the wife to be evasive and somewhat difficult witnesses.

The judge concluded that Pat did appear to be living with the wife on what seemed to be “very, very close to a full-time basis.” The judge also reasoned that the wife appeared evasive when answering questions due to the highly-invasive investigation that the husband undertook prior to the hearing. The judge noted that the investigators took some 290,000 photos of the wife, her children, and Pat, and even sought the wife and her daughter’s medical records. The judge estimated that the husband spent “over $65,000 before trial, maybe $100,000 with a chance . . . of getting back $30,000 . . . from a woman who has been in and out of bankruptcy and owns nothing.” The judge concluded that, while the husband may have shown that Pat lived with the wife, he had not proved under New Jersey statute that the couple met the legal definition of “cohabitants.” Namely, the husband had not produced evidence showing that Pat and the wife had comingled their finances. Additionally, there was no evidence that Pat shared in the household chores, that he promised to support the wife, or that the pair held themselves out as a couple in public.

When the husband appealed this decision, the Appellate Division upheld the trial court’s ruling and declined to alter the alimony owed by the husband. In its opinion, the Appellate Division explained that terminating or suspending alimony due to cohabitation required proof that the cohabitation had “reduced the financial needs of the dependent former spouse.” The opinion listed the factors included in the New Jersey statute on cohabitation, which included:

The Appellate Division’s opinion explained that the husband had been unable to prove that Pat and the wife had met these criteria as cohabitants, and that it appeared instead that Pat lived with the wife only as a means of spending more time with his daughter. The court affirmed the denial of the husband’s motion.

If you need seasoned and professional legal representation in a New Jersey alimony dispute, contact the Union offices of John B. D’Alessandro at 908-964-0102.