How Do NJ Courts Deal With Religious Child Custody Disputes? 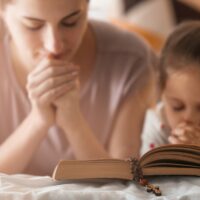 Arguments over how best to raise the children can be complicated in a stable marriage. When co-parents are divorced, making those decisions can be even more challenging. Many parents hold strong religious views and care deeply about ensuring that their children carry those same values. What happens if divorced or otherwise separated parents disagree on their children’s religious upbringing? Who gets to decide? Will New Jersey courts get involved? Read on to learn about how New Jersey courts handle disputes over religion in child custody matters, and call a savvy New Jersey child custody and parenting time attorney for help with a New Jersey family law matter.

Primary Custodial Parent Gets to Decide, but Other Parent Can Share Religion, too

Based on New Jersey case law, the PPR has the primary right to determine the child’s religious upbringing, even in a joint custody arrangement. That means that the PPR can choose which religion to impose upon the child, take the child to religious services, enroll the child in religious schools or programs, convert the child to a preferred religion, and generally teach the child about that religion, even over the objection of the other parent.

The PAR, on the other hand, is generally allowed to “expose” the child to any alternate religion but may not fully “educate” the child on other religions without the permission of the PPR. Unless the PPR agrees, the PAR cannot unilaterally enroll the child in educational programs or schools (such as Hebrew School or Sunday School) or go through the process of converting the child to that religion. The PAR is permitted to personally teach the child about their preferred religion, and most New Jersey courts agree that the PAR can also take the child to religious services during their parenting time without the approval of the PPR.

Parents Can Put Religion in Writing

The best way to ensure there are no complications regarding the children’s religious upbringing is to put it in writing. Parties to a divorce or who are otherwise engaged in a custody dispute can stipulate how religion will be handled in the divorce settlement or other written custody agreement. The settlement may provide that both parents are free to expose the children to their religion as they see fit, or that the children can only go to certain types of religious ceremonies or religious schools. To ensure that such an agreement is enforceable, it should be written down and stated clearly. So long as religious provisions in the settlement agreement are consistent with the best interests of the child, the court will likely enforce the agreement. If an agreement was made orally during the divorce, however, or if the written agreement is ambiguous on the issue of religion, then courts are unlikely to enforce the terms of the “agreement.”