When Will a New Jersey Court Override a Premarital Agreement? 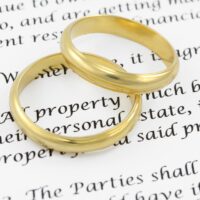 Premarital agreements are meant to be binding contracts on a marrying couple. They can be used to establish a variety of financial rights and obligations in advance of marriage that will apply in the event of a divorce, including spousal support, the division of marital property, life insurance benefits, and other issues. New Jersey courts will typically enforce valid premarital agreements, so long as they do not include provisions that go against public policy.

The case of Kambitsis v. Kambitsis involved a divorcing couple with a premarital agreement (PMA). At the time they entered the PMA and married, the plaintiff’s net worth was around $52,000, while the defendant’s net worth was about $21 million. The PMA waived the plaintiff’s right to alimony, providing instead for a lump sum payment of $145,000, three years of health insurance, a limited life insurance policy, and certain limited other funds to help the plaintiff buy a house and car. The PMA also waived the plaintiff’s right to distribution of any assets the defendant acquired during the marriage. The couple shared several children.

Even though the family court found the PMA valid (plaintiff signed the document voluntarily, without duress, with the advice of counsel, and without fraud), the court chose to override the PMA in certain areas. Under New Jersey Law, a court can override a valid PMA if the PMA is “unconscionable.” A PMA is unconscionable if, due to a lack of property or unemployability, it would leave a dependent spouse without means of reasonable support or otherwise with a standard of living far below that which was enjoyed before the marriage.

Here, the family court found that following the PMA would be unconscionable on those grounds. However, it took an unusual approach: Rather than rule the PMA unenforceable, it underwent a “rescue” mission to help the plaintiff. The rescue mission involved leaving the alimony waiver intact but revising the PMA in other areas in such a manner as to force the defendant to pay more.

The New Jersey Appellate Division was more direct: Following the PMA would be unconscionable. The parties were at a distinct financial imbalance when they married, and following the PMA would leave the plaintiff without a reasonable means of support and with a standard of living well below what she had before the marriage, especially in light of the shared children. The appellate court invalidated the alimony waiver and remanded for further proceedings.