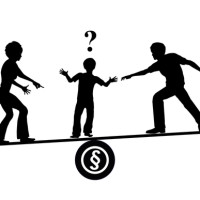 In a newly-published opinion that highlights the complexities and new definitions that must be created in a legal landscape that includes same-sex marriage, Ocean County Superior Court Judge Stephanie Wauters allocated custodial rights to three different individuals.

The case, titled D.G. and S.H. v. K.S., involved a custodial dispute over a now-five-year-old girl between the mother, biological father, and father’s husband. The three parental figures began discussing the possibility of having a child together in 2006, and, after becoming pregnant using D.G.’s genetic material and artificial means, K.S. gave birth to their daughter, O.S.H., in 2009. The daughter was given S.H.’s surname, and was his stepdaughter, but was not otherwise legally or biologically related to him. The three lived together for a time in K.S.’ home in Point Pleasant. D.G. and S.H. moved to Manhattan, where they would take O.S.H. for weekend visits, as well as for extended stays over the summer while S.H. was on vacation from teaching. K.S. began taking their daughter with her on trips to Costa Rica where she owned a home, and where she met the man with whom she fell in love. When K.S. became engaged to be married, she made plans to move to California to be with her fiancé, and announced her intention to take O.S.H. with her. When discussions over how to arrange parenting time among the three broke down, D.G. and S.H. filed a complaint seeking legal and physical custody over O.S.H., and a determination that S.H. was both a psychological and legal parent to the girl. K.S. responded, seeking: child support; medical coverage; permission to relocate with O.S.H. to California; establishment of a legal custodial relationship with the parties; and establishment of a parenting time arrangement.

Judge Wauters presided over a 19-day plenary hearing, which resulted in the recently-released, 67-page opinion. While the parties had stipulated to a determination that S.H. was the child’s psychological parent, the court agreed with this determination. In support of this determination, the court cited S.H.’s parent-like bond with O.S.H. as fostered by the child’s biological parents, his planned role as a parental figure even before O.S.H. was born, and his financial and emotional support of the child. The judge went on to find that the three parties should share equally in both legal and residential custody of the girl, dividing her time equally between K.S.’ home and that of D.G. and S.H. The judge noted that, since the parties shared custody, a parent’s application to relocate with the child needed to be analyzed in the same way as an application to change custody, and would require the applying parent to show that the child’s best interests would be promoted by changing residential custody to being exclusively with the relocating parent. The court found that, since many of the details of K.S.’ relocation remained tentative, the child would be deprived of parenting time with D.G. and S.H., and she would be uprooted from her current stable living arrangement, a relocation was not in O.S.H.’s best interests. Finally, Judge Wauters denied S.H.’s application to be named one of O.S.H.’s legal parents. The judge noted that she lacked support in the law for the creation of a legal parental right for someone who did not have a relationship with a child established through gestational primacy, genetic contribution, or adoption, and that such a change in the law would need to come from the New Jersey State legislature.

If you are facing a complex New Jersey custody-sharing dispute, seek out an attorney with the experience and compassion to help you reach an outcome best for your child, and contact Union family law attorney John B. D’Alessandro for a consultation on your case, at 908-964-0102.