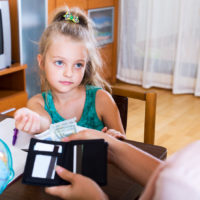 The New Jersey Appellate Division recently issued a ruling granting a mother’s request for an increase in child support payments. The father’s arguments to the court against the increase were harmed, in part, by his lack of transparency about his income and refusal to comply with court requests. You can learn more about what led to the increase in child support below. Speak with a seasoned New Jersey child support attorney with additional questions about the law or your own case before a Family Part judge.

S.W. v. E.W., the recently-decided case, focused on a request for increased support for two daughters who had reached college age. After the couple’s 2011 divorce, the husband had been ordered to provide sales records, tax returns, 1099s, and K-1s to the court each year. The father never complied with this request. Several years later, the mother filed a request for an increase in child support, later offering detailed records of expenses incurred by the couple’s elder daughter while she was finishing college and preparing for graduate school applications.

The father argued that his elder daughter, by then 24 years old, should not be the subject of child support, and that he should not have to pay more in support for his younger daughter since he paid a portion of her college expenses and tuition. However, the father did not present evidence that he contributed to his younger daughter’s college expenses, nor did his proposed expert testify on why his company’s accounting methods necessitated him taking loans of corporate funds rather than allowing those to remain in the company’s accounts. The judge, finding that the father had failed to contest the mother’s evidence, granted the request for an increase in child support.

The father contested this decision on more than one basis. In part, he argued that his elder daughter should have been considered emancipated before her 23rd birthday, since she had graduated from college ten months before. The Appellate Division noted in its opinion that a child will be considered emancipated when a parent proves that the child is beyond the parents’ “sphere of . . . influence.” Since the father provided no evidence that his daughter had graduated from school, no longer relied on her parents for support, and earned an independent living prior to her 23rd birthday, the court rejected the father’s argument.

The father also appealed the trial court’s determination that he earned an average income of $312,000, but this argument was also rejected. The Appellate Division noted in its opinion that during the child support dispute, the father had repeatedly failed to comply with document requests and requests for information. The father had also never complied with the court’s order that he provide annual tax return and earnings information. The Appellate Division also pointed out that the father’s behavior had caused numerous costly delays in the litigation, justifying the court’s decision to make the increase in child support retroactive. The father’s uncooperative behavior resulted in an award of supplemental child support retroactive to 2014, when the mother first filed her request to increase child support.

If you need the help of a trustworthy, dedicated, and knowledgeable New Jersey family law attorney, contact the Union offices of John B. D’Alessandro for a consultation on your case at 908-964-0102.