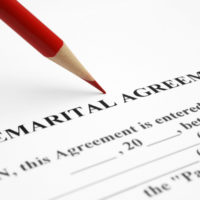 In a recent New Jersey Appellate Division opinion, the judges upheld a trial court decision that affirmed a premarital agreement and a trial court’s division of assets, and awarded the wife attorneys’ fees for defending a meritless attempt to have the couple’s premarital agreement declared void. Read on to learn about the case, and contact a knowledgeable New Jersey family law attorney for help with a complex divorce.

The couple at the center of the case of C.B. v. K.B.K. were married in 1995 and filed for divorce in 2013. The couple had signed a prenuptial agreement stating that, if they divorced, any assets they owned prior to the marriage would remain separate, non-marital property, which would not be subject to equitable division. The spouses filled out financial disclosures listing all the assets they owned at the time of the marriage; the husband’s gross assets totaled $75,000, while the wife’s totaled $951,000. During the marriage, the husband contributed little toward the couple’s expenses. He was thus able to contribute a large share of his salary to his 401k, while the wife used a loan taken out against their home (which she’d purchased prior to the marriage) to pay many of the couple’s expenses.

During their divorce trial, the family part judge divided many of the couple’s marital assets equally but awarded a greater share overall to the wife. The judge’s thorough opinion explained, for example, that the husband was not entitled to a share of the wife’s checking account, since it “was opened two years after [the husband] stopped making any financial contributions to the marriage and the parties’ living expenses and [the wife] was paying all of the bills.” Additionally, while the wife was entitled to a 401k that the husband had paid into during the marriage, the husband was entitled to only a small share of the wife’s 401k. The judge did not mince her words in explaining the reasons for her award, noting the husband’s “minimal financial contributions to the marriage and his total failure to contribute from 2009 to the present. As noted earlier, for [ten] year[s] of the parties’ [seventeen]-year marriage, [the husband] contributed less than [two percent] to the parties’ marital expenses and assets and for the other [seven] years he contributed nothing.” The husband appealed the trial judge’s decision.

“Equitable distribution is a three-step proceeding, in which a trial judge must (1) decide what specific property of each spouse is eligible for distribution; (2) determine its value for purposes of such distribution; and (3) decide how such allocation can most equitably be made.” (Internal quotations omitted.) The court’s opinion pointed out that “‘equitable’ does not necessarily mean ‘equal,’” and that a family part judge’s job is instead to divide the assets “according to the unique needs of the parties.” The Appellate Division affirmed the trial judge’s greater allocation of assets to the wife, since she “paid the vast majority of the parties’ expenses and proved [the husband] made little or no contribution to them.”

The husband had contested the fact that several of his assets had been deemed marital rather than non-marital, while the wife had successfully had several of her assets deemed non-marital and exempt from equitable distribution under their premarital agreement. The trial court had found that, unlike the wife’s assets, which had been included on her financial disclosure form created prior to signing the prenuptial agreement, the assets that the husband sought to have declared non-marital either weren’t listed on his premarital disclosure or had been paid into by the husband after being married. Anything earned by the spouses during the marriage is considered a marital asset; when marital assets are used to improve and increase non-marital assets, the other spouse develops a right to at least a portion of those assets. The Appellate Division’s opinion went on to note that the husband still came out of the marriage ahead: “[A]s [the wife] points out, [the husband] entered the marriage with $75,000 in assets and left with $479,000.”

Award of attorneys’ fees where argument made in bad faith

Finally, the husband disagreed with the trial court’s award of attorneys’ fees to the wife. In a separate hearing, the husband had contested the validity of the couple’s premarital agreement on the basis that the couple had included a “sunset” clause in an addendum that the spouses added after they had originally signed the agreement. This clause allegedly made the premarital agreement void if the spouses stayed married for over 12 years (the couple had been married for nearly 18 years). Unfortunately for the husband, he could produce no evidence of the existence of the sunset clause—no written version, no eyewitnesses to its creation, nothing. The trial court weighed the factors to be considered when awarding counsel fees—the “applicant’s need for fees, the respondent’s ability to pay, and the applicant’s good faith in litigating the proceeding”—and awarded fees to the wife. The judge noted that, throughout the divorce, the wife had spent over nine times what the husband had spent on legal fees, and that, more importantly, the husband’s “lack of candor and complete absence of proof to support his position” informed her decision to award attorneys’ fees to the wife. The Appellate Division wholly supported this award.

If you’re in need of skilled, knowledgeable legal assistance with a divorce in New Jersey, consult with the professional and trial-ready family law attorney John B. D’Alessandro, in Union at 908-964-0102.