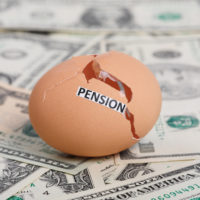 In a recent published opinion—one that can be cited and relied upon as law in future cases—the New Jersey Appellate Division ruled that, when a pension that was to be shared by both spouses is depleted, courts are permitted to find a change in circumstances that could result in the imposition of alimony, even where parties had previously waived their entitlement to alimony. Read on to learn about the New Jersey divorce modification case with an override to the alimony waiver.

The case, titled Fattore v. Fattore, was filed by a former wife against her ex-husband. The couple had divorced in 1997 while both spouses were still employed. The couple’s judgment of divorce included a waiver of alimony by both spouses, as well as an agreement that the wife would receive half of the pension that the husband had earned while serving full-time in the Army National Guard. The husband subsequently became disabled and began collecting his pension and disability benefits. Eventually, the husband selected disability benefits, which were non-taxable income. This depleted the pension so that there were no funds left to be paid to the wife.

The wife filed a motion with the family part requesting that the court compel the husband to compensate her for her lost share of the military pension in the form of alimony. The court found that, despite the fact that the husband’s disability benefits were non-taxable, exempt income, the wife had not lost her interest in the pension. The judge ruled that the husband was required to pay $1,800 per month to the wife, a payment that should not be considered alimony but instead an equitable distribution payment for the wife’s share of the pension. At the time, applicable law in New Jersey stated that a spouse was required to provide direct compensation for the decrease in value of a pension caused by the spouse’s voluntary election of disability benefits.

The husband appealed this decision, based in part on a decision issued by the US Supreme Court in the intervening months. The decision, titled Howell v. Howell, ruled that state courts could not require that spouses who elected to receive disability benefits from their pension pay the lost value of the pension to the payee spouse from another asset. In other words, if a share of a military pension was awarded to one spouse in a divorce, courts are now barred from determining exactly how much the payee spouse would have received from that military pension had the payor not elected to receive exempt disability benefits, and then require the payor to pay that amount from some other asset, since the pension is now unavailable. The wife appealed, as well, asking that the court instead award her with alimony based on the substantial change in circumstances since the divorce.

The Appellate Division agreed that the trial court’s ruling couldn’t be enforced based on the Supreme Court’s opinion in Howell. However, the court found that not compensating the wife for this loss would be an unfair result. The Appellate Division ruled that the change in circumstances caused by both the Howell ruling and the depletion of the pension was permanent and substantial, and the alimony waiver did not “withstand the inequity created by unforeseeable circumstances.” The court pointed out that the wife agreed to the alimony waiver because she had been promised another form of compensation; namely, a 50% share of the pension. In order to fulfill her contractual right to compensation, she was entitled to a hearing on whether she deserved to receive alimony.

For effective and dedicated legal help with a New Jersey divorce or alimony determination, contact the Union offices of John B. D’Alessandro for a consultation at 908-964-0102.