Lawyer Representing Himself in Divorce Claims Ineffective Assistance of Counsel 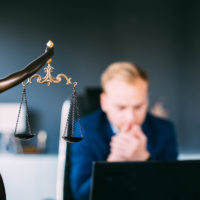 There’s an old saying in the legal community that a lawyer representing himself in court has a fool for a client. In one recent case before the New Jersey Appellate Division, a lawyer who worked in criminal defense and chose to represent himself in a divorce claimed that the couple’s settlement agreement should be abandoned for unfairness, while a judge disagreed. Learn about the case below, and contact an experienced New Jersey divorce lawyer for help with divorce, child custody and other family law matters.

The couple at the center of the case titled A.P.T. v. L.C.T. had been married for over 20 years at the time of their divorce in 2014. The couple had two children in college at the time of the split. The husband worked as an attorney for the New Jersey Office of the Public Defender as he had for many years, and the wife worked as a schoolteacher. When it became clear that he would be divorcing his wife, the husband asked his fellow attorneys at the public defender’s office about whether he should hire a divorce lawyer to handle his case. They suggested that he do so, and the husband had a meeting with one seasoned divorce lawyer before deciding to represent himself.

The couple entered a property settlement agreement (PSA) in 2015, negotiated by the wife’s attorney and the husband. The PSA divided the marital debts between the couple, awarded the wife a 50% share of the husband’s pension, and awarded the wife permanent alimony that amounted to $22,000 per year before the husband’s retirement (which the parties stipulated could occur any time after the husband turned 60), and $10,000 per year thereafter. The PSA stated that the alimony award was not modifiable based on the husband retiring early or late, or if he began work for a private law firm after retiring from the public defender’s office (a career change that the husband was considering, and which he believed could have been very lucrative). The wife was also awarded the value of the husband’s unused sick days to be paid out upon his retirement, which had a value of roughly $10,000 at the time of the divorce. The PSA stated that, if the husband took sick days for reasons other than a legitimate illness, he would have to compensate his wife for these days through other sources.

After a conflict with the public defender’s office, the husband agreed to an early retirement in September 2017, and in 2016 he filed paperwork to begin drawing his pension. When the wife’s lawyer learned of this and contacted the husband about it, he confirmed that he had indeed filed for pension benefits and also notified the attorney that all but three days of sick leave were left. When the husband explained that he’d taken a month off work for “mental exhaustion,” the attorney asked for evidence from a doctor of the illness that required such a long absence from work. The husband subsequently missed several alimony payments. He retained an attorney, who sent a letter to the wife’s attorney requesting a modification of alimony, arguing that the PSA would be invalidated by a judge because it contained a permanent alimony provision and provided the wife with a windfall after the husband’s retirement.

The husband retired as scheduled on September 1, 2017 and failed to pay the reduced alimony owed under the PSA. The wife filed a motion in April 2018 to require the husband to meet his alimony obligations, and the husband (again representing himself) responded with a motion to nullify the PSA. The trial court judge felt the husband’s arguments were misguided and denied his motion. In his opinion, the judge pointed out that the husband had plenty of opportunities to go over the PSA with an attorney, but that the PSA nevertheless appeared to offer a fair outcome to both spouses. The husband had provided a letter from his counselor stating that the husband had not been mentally competent to sign the PSA when he did, but the judge viewed this evidence with no small amount of skepticism. The judge pointed out that, if he wasn’t competent to enter the PSA, then he wouldn’t have been competent to represent any clients as an attorney, which he was doing at the time. Additionally, the judge pointed out that the permanent, unmodifiable alimony was a term that was bargained for in exchange for other advantages to the husband, was legal, and appeared fair to both spouses. The judge concluded that there was no evidence of fraud, misrepresentation, or other bases for cancelling the terms of the PSA, and the husband appealed.

The Appellate Division affirmed the trial court’s decision and concluded that the PSA remained legally binding. The court explained that, while the Lepis rule mandated that alimony is modifiable when parties can show “changed circumstances,” spouses are free to enter settlement agreements that create their own rules on how alimony should be modified so long as those rules are reasonable. The court explained that the husband gained the right not to have to pay more than $10,000 per year after his retirement, regardless of whether he earned more as a private attorney, as well as the right not to have to work past age 60. Since this term in the PSA provided a benefit to the husband as well as the wife, it appeared not only not illegal, but fair and reasonable. For this and other reasons, the Appellate Division rejected the husband’s motion and enforced the PSA.

If you need experienced, knowledgeable, and effective legal help with a New Jersey divorce, contact the Union offices of family law attorney John B. D’Alessandro for a consultation on your case at 908-964-0102.