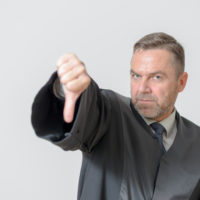 In a recent decision by a New Jersey Family Part judge, a spouse faced serious consequences for failing to attend a mandatory settlement conference, despite being offered repeated chances to respond and participate.

In the case in question, titled Swift v. Swift, the couple had been married for nearly seven years when the husband filed for divorce and sought equitable distribution of certain property in April of 2016. The wife responded with her own counterclaim for divorce, and likewise sought to have certain property equitably distributed in June of 2016. The judge notified the parties that they were each required to appear for an Early Settlement Panel (ESP) conference in October. While the wife appeared in court that day, the husband did not. The wife notified the court that she believed her husband had not appeared because he no longer wished to move forward with the divorce, but that she did. In his absence, the husband received a $200 fine, and the ESP conference was rescheduled for one month later. At that time, the wife appeared yet again, and yet again, the husband did not.

Judge Lawrence Jones began his opinion by explaining the importance of the ESP conference. The judge explained that the conference is not itself a divorce trial, but only an opportunity to settle certain issues before going to trial. Only certain cases which the judge believes are good candidates are referred to the ESP program. At an ESP conference, divorcing couples meet with a panel of one or two volunteer experts. Most panel members are experienced divorce lawyers, but some may have financial expertise, or even have once served as family court judges. The conferences are confidential and offer a lower-pressure environment to attempt to settle certain issues before undertaking the time and expense of a trial. Any offers to settle or suggested compromises made either by spouses or the panelist will not be presented to the court afterward if settlement isn’t reached, in order to encourage the free flow of ideas. These free sessions with a seasoned mediator can be helpful to litigants, even when they do not ultimately result in a settlement. If the ESP conference is successful, however, both parties and the court system stand to save countless hours and thousands of dollars by avoiding trial.

Judge Jones went on to describe the importance of each party making a good faith effort to settle their claim out of court by participating in these conferences, and the consequences for failing to do so. He wrote, “Whether meeting with a panelist separately or together, a litigant generally does not have the right to simply refuse to participate, or to repeatedly decline to show up on ESP days.” While the judge had previously imposed a $200 fine on the husband for failing to appear the first time, he chose instead to dismiss the husband’s divorce filing and request for equitable distribution, instead granting the wife’s by default, issuing a final judgment of divorce, and granting her request for equitable distribution of the husband’s retirement plans. The case serves as an excellent reminder of the serious consequences litigants may face for failing to respect the court’s orders.

If you are facing a divorce in New Jersey, seek legal representation that will ensure your divorce is equitable by contacting the seasoned Union family law attorney John B. D’Alessandro for a consultation, at 908-964-0102.