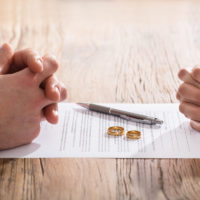 Finalizing a marital settlement may not be the last hurdle a divorced couple faces. Either party may find reason to object to the terms of the settlement down the line, such as if new financial evidence comes to light or if one party’s financial circumstances change dramatically. A recent appellate case sheds light on how New Jersey courts will handle objections or modifications to the terms of an agreed-upon marital settlement. Read on for a discussion of the recent New Jersey family law case, and contact a knowledgeable New Jersey divorce and alimony attorney with any questions.

The case: Divorcing husband agrees to alimony, wife later gets a new job with great pay

The case of M.S. v. M.A.S. involves a couple married in August 2000 and divorced in 2015. They share two children. After a two-year legal battle, the parties jointly agreed on a Divorce Settlement Agreement (DSA). The DSA included provisions regarding the known income of each party and set alimony at $100,000 plus 25% of any “gross cash bonus” the plaintiff earned for eight years, and then for two more years he would owe only $75,000 flat in alimony to the defendant. The DSA included other explicit alimony provisions including life insurance and termination upon remarriage or death, and noted that the terms could only be modified on a showing of “unusual circumstances.”

After two years, the plaintiff stopped paying alimony and then filed a motion to have his alimony requirement terminated, or to have the “gross cash bonus” offset by any corresponding bonus that the defendant receives for her job. He argued that the defendant had become a full-time permanent employee with a salary of $190,000, plus a substantial bonus. He argued that because his ex-wife was making so much money on her own, he should not have to continue to pay alimony. The family court reduced the plaintiff’s alimony to $73,500 based on the defendant’s increase in income but otherwise denied his motion. He appealed.

The appellate court stated that where parties agree to the amount and conditions of alimony, those agreements should be enforced like any other settlement agreement. Parties are bound by the terms in a clear, unambiguous contract, unless there is some reason to invalidate the contract. Here, the terms were clear, and the defendant’s increase in income did not count as “unusual circumstances,” which the DSA clearly stated were the only grounds for modifying alimony. The court found no grounds to “rewrite” the contract to either terminate the alimony or add a provision that offsets the 25% of plaintiff’s bonus with any cash bonus received by the defendant for her new job.

While marital standard of living is irrelevant if agreed alimony is fixed, it matters on modification

Alimony is meant to maintain the marital standard of living for the lower-earning party. A subsequent increase in income for the paying party should not be grounds to raise alimony, because the new, higher income does not reflect how life was when the parties were married. But, a subsequent increase in income for the receiving party might be grounds for modification, because the receiving party may no longer need alimony to reach the standard of living they enjoyed during the marriage. Additionally, if the paying party has a negative change in circumstance and can no longer afford to pay, alimony may be modified.

In this instance, the parties agreed on a fixed rate for alimony: $100,000 plus a percentage of the plaintiff’s bonus. In an uncontested divorce where the parties agree to a fixed amount of alimony, the court does not need to make a finding regarding the marital standard of living. The parties can agree to whatever they want. But, if one party wants to modify those terms down the line, then the marital standard of living does matter.

Here, the appellate court noted that the family court did not make any finding regarding the marital standard of living in evaluating the motion to modify alimony. The defendant/recipient’s increase in income was a change in circumstances sufficient to trigger a review of the alimony arrangement, and the family court should then have asked what modification is appropriate in order to set alimony at a level that allows the defendant to maintain the standard of living she enjoyed during the marriage. Because the family court ignored this important factual question in ruling on the alimony modification, the appellate court reversed the family court order and kicked the case back down for a review of the financial circumstances of the parties at the time of the marriage and where they stand now.