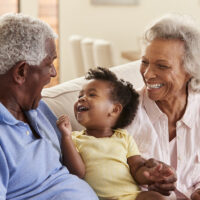 New Jersey’s Grandparent Visitation Act (the GVA) states that a grandparent “of a child residing in this State may make application … for an order for visitation.”  In order to prevail, the grandparent must demonstrate that “granting visitation is in the best interests of the child.”  At first blush, this appears to be a favorable standard of proof, putting grandparents and parents on a near-equal footing. However, the scope of the GVA has been severely limited by federal constitutional law.

In 2000, in the matter of Troxel v. Granville, the United States Supreme Court held that the Due Process Clause of the Fourteenth Amendment protects the fundamental right of parents to make decisions regarding the care, custody, and control of their children.  Based on this ruling, New Jersey courts have held that a court can only intervene on parents’ decision-making in order “to avoid harm to the health or welfare of a child.”  Courts must heavily favor the parents’ preference, including to deny visitation to grandparents, unless there is a compelling reason to do otherwise.

The recent case of L.S. v. F.S. involved a petition for visitation under the GVA.  The children lived with their father as well as the petitioners–the father’s mother and grandmother–for several years.  The grandparents enjoyed regular contact with the children and shared a close relationship thereafter, until a dispute arose between the father and the grandparents.  They agreed to a written visitation schedule, but the father stopped adhering to the schedule after the first few visits and eventually cut off contact between his kids and their grandparents completely.

Here, despite the close relationship with the grandparents, the Appellate Division found the plaintiffs had shown no danger of concrete harm to the children should their relationship with their grandparents be ended.  Specifically, the court found that the children’s parents were undeniably “fit” parents.  There were no legitimate allegations that the parents were unfit, such as if they were abusing the children or leaving them malnourished.  At worst, the children would miss out on some happy moments with their grandparents, but they would not suffer true and specific harm.

Nor did the written agreement make a difference; it was not implemented by a family court, for example, and was simply a written contract between the parties.  Such agreements, if not put into place by court order, will not override a parents’ right to make decisions for their children.  For those reasons, the Appellate Division refused to override the parents’ decision to deny visitation to the grandparents.

If you’re in need of experienced, passionate, and effective legal help with child custody, grandparents’ rights, or other family law matters in New Jersey, contact the Union offices of family law attorney John B. D’Alessandro at 908-964-0102.