Does Fault Matter in a New Jersey Divorce? 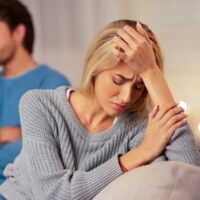 Historically, divorces were only granted when one party could prove the other party had committed some wrongful act: adultery, abandonment, abuse, etc. Now, divorces are available without demonstrating any sort of bad behavior and are available over the objection of the other spouse. Does that mean that wrongful behavior in a marriage is completely irrelevant to the divorce? Read on to learn about when fault may actually matter in a divorce, and call a seasoned New Jersey divorce attorney for help with a divorce or family law matter.

Grounds for Divorce in New Jersey

The equitable distribution of the marital estate in a divorce depends on a variety of factors. If a party deliberately wastes or destroys assets that are part of the marital estate, then the court may choose to reduce that party’s share of the available assets in the eventual divorce decree. Destruction involves literal destruction of property, such as smashing a phone or crashing a car. Dissipation or waste occurs when a party uses assets for their sole benefit and in a manner that does not benefit the marriage. For example, if a spouse burns through the couple’s savings on lavish vacations without their spouse, those actions might count against their share of the marital estate.

Dissipation may arise in the context of an affair. If a party spends a chunk of the couple’s assets on lavish gifts for a third party, or vacations taken with a paramour, then those wasted assets might count against their share. Dissipation claims also often involve gambling debts or using marital assets to support the spouse’s extended family against the wishes of their spouse.

A court will strongly consider intent when deciding whether assets were dissipated. If a party, for example, invests the couple’s money in a business venture that later falls through, but the spouse believed in good faith the investment would pay off, the court might not view it as “dissipation.”

“Mental and physical cruelty” continues to be a ground for divorce in New Jersey, although the party seeking divorce can typically file for “irreconcilable differences” just as easily. However, mental and physical abuse, harassment, and threats may be relevant to other parts of the divorce. If a party abuses or threatens abuse towards their spouse or the kids, their spouse could and should seek an order of protection (often called a “restraining order”). An order of protection can force an abusive spouse to move out of the family home and avoid contact with their spouse, the kids, and other family members.

Abuse is also relevant when establishing child custody and visitation. An abusive parent is likely to get little to no custody rights and may be required to have a supervisor during visitation, if any visitation is permitted.

Whereas divorces end marriages, annulments legally establish that the marriage never existed. Annulments are rare and require specific circumstances indicating the marriage was never legally valid. Grounds for annulment in New Jersey include:

Several of these grounds involve some sort of wrongful behavior by one spouse causing the marriage to be invalid. If you believe you have grounds for an annulment, speak with a knowledgeable New Jersey divorce and annulment attorney.

If you need passionate and effective legal help with property division, child support, alimony, divorce, or other family law matters in New Jersey, contact the Union offices of family law attorney John B. D’Alessandro at 908-964-0102.