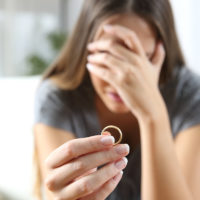 Milagros Beltra was terminally ill when she filed for a divorce from her husband of 34 years. Six months later, before the divorce was finalized, Milagros passed away. Her eldest son petitioned the court to be substituted into the litigation on behalf of Milagro’s estate; this motion was granted.

A five-day hearing was later held on the equitable distribution of marital assets. During this trial, the judge observed that the testimony of the husband was “evasive,” “inconsistent” and lacking in candor and credibility. It was the opinion of the judge that the husband had diverted marital assets consisting of substantial amounts of cash and hid them from the court to avoid having them subject to distribution as marital property.

It was also alleged that the husband purposely delayed the divorce process, knowing that the wife would pass away soon.

The general principle is that death of one party ends a divorce action, and Milagros’ death prevented a final judgment of divorce in her case. Normally there can’t be any equitable distribution of marital property if one of the parties has died, but there are exceptions, such as when it would be necessary to prevent fraud or unjust enrichment.

Such was the case here, and the judge decided that the assets & liabilities should be divided equally, except for a personal judgment against the husband resulting from his business dealings. The judge imposed a constructive trust on the assets the husband was holding, so that they could be divided between the husband and the deceased wife’s estate. A constructive trust is a trust imposed on the assets of somebody who obtained property through fraud or some other illegal or improper conduct. The trust property is then held for the benefit of the proper beneficiary.

A constructive trust is what is known as an “equitable remedy.” Judges have the power to impose equitable remedies to fix a situation where one party has committed bad acts and taken advantage of the other. In these situations, the judge has broad power to fashion a remedy that prevents a party from being rewarded, or “unjustly enriched,” by the bad behavior.

Husband Wins, but Only Briefly

The husband appealed, and, interestingly, the appeals court vacated the lower court’s decision. According to the appellate court, the trial record did not support an entry of post-death equitable distribution or the imposition of equitable relief. But the husband could not breathe easy just yet. The appellate judges sent the case back down to the trial court, so that the judge could make the necessary findings on the record which would authorize the court to impose equitable relief.

The second time around, the judge made the necessary findings and again ordered an equitable distribution of property. The husband appealed again, but this time, the court in Estate of Beltra v. Beltra affirmed the decision of the lower court.