Debt and Divorce in New Jersey 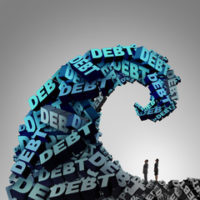 Often, parties working on the distribution of marital assets in a divorce do not fully consider how debt factors in. Read on to learn about the common types of debt married couples face and how it will be apportioned in a divorce, and contact a seasoned New Jersey divorce lawyer with any additional questions.

What happens to debt in a divorce in New Jersey?

Generally: Debt is divided up the same as other assets

In New Jersey, the court will divide up and distribute marital assets and marital debts according to the principles of equity and fairness. A judge will subtract the amount of marital debt from the total value of the marital property before distributing property between the spouses. The court will consider factors such as the length of the marriage, parties’ age and health, the economic circumstances of each party, other debts and liabilities, and the parties’ income and earning capacity in deciding the distribution of assets and debts.

Unsecured debt: The debt may be divided up, or given to one party

The most common unsecured debt is credit card debt. Unsecured debt like this will be distributed among the parties as part of the marital assets. The court may consider, for example, who benefited most from certain expenses in determining whom to assign that debt to. Often parties will use marital assets to pay off the debts during the divorce process so that they can continue after the marriage debt-free.

A very important factor to keep in mind: Creditors can go after both spouses for credit card debt, even if the parties agree that one party will be responsible for a specific debt, and even if a court orders that one party must repay a specific debt. From the perspective of the creditors, when they issued the debt, they were depending on the finances of both spouses, and thus both spouses are responsible. You can protect yourself from this by either selling marital assets to pay the debt during the divorce, or by signing an agreement with your spouse in the divorce whereby if they fail to pay their debts and the creditors go after you instead, your spouse will be liable to repay you for whatever you end up giving to the creditors.

Getting the house or the car in the divorce settlement is not always as great as it seems. If a house is subject to a mortgage, or if the car is tied up in auto loans, then whoever wins that house or car in the divorce will likely “buy” the other spouse’s share in the home with a portion of their stake in the marital assets, and will owe the remainder of the debt. Often the best course of action is to sell the house and use the proceeds to pay off the marital debt. This solution may be complicated if, for example, the couple has children and moving the children would be detrimental.

If you are considering divorce and need experienced legal help in resolving these issues, contact the seasoned and dedicated New Jersey family law attorney John B. D’Alessandro for a consultation on your case, in Union at 908-964-0102.