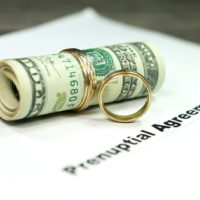 In an opinion recently released by a New Jersey Superior Court judge in Bergen County, the judge upheld the requirement that palimony agreements be made in writing in order to be found valid. The opinion was issued in the case Lee v. Kim, where the plaintiff ex-girlfriend and mother of the defendant’s child claimed that a promise of financial support had been made but not honored.

A palimony agreement is an agreement to provide financial support of some kind to a partner in a personal, marriage-like relationship. In 2010, New Jersey lawmakers added palimony agreements to the list of contracts which must be written in order to be enforced under what is known as the Statute of Frauds, and also created a requirement that those agreements be reviewed by an attorney before being signed. It was this requirement of a writing that the plaintiff, Sook Hee Lee, challenged. She claimed in her lawsuit that the defendant, Dr. Jonathan Kim, had made promises over the course of their two-year-long relationship to provide ongoing financial support to her, and that he should be compelled by the court to make good on those promises. When Kim pointed out that no writing existed proving the existence of this agreement, Lee argued that the requirement of a writing was unconstitutional, infringing on, among other things, her right to privacy in her personal relationship, and her right to form oral palimony contracts. Judge Terry Bottinelli dismissed these arguments, denying that these were protected rights under the New Jersey Constitution, and found that Lee was not entitled to palimony due to the lack of a written contract.

The judge pointed out that the requirement that agreements be in writing allows couples to avoid becoming “entangled in acrimonious multi-year litigation over a contract that may or may not have ever existed. The provision of the palimony law which requires a contract to be in writing allows for clear and unequivocal interpretation and allows for the court to dispense justice in a concise manner.” The judge also noted that palimony agreements didn’t require different treatment from prenuptial, post-nuptial, or divorce settlement agreements. All these agreements, formed between couples regarding financial support after a relationship ends, need to be in writing if a court is to enforce them. Judge Bottinelli saw no justification for palimony agreements to be the exception.

If you are a New Jersey resident and are considering forming a prenuptial agreement, post-nuptial agreement, or agreement to provide support to a partner to whom you are not married, seek legal advice from the seasoned and knowledgeable Union family law attorney John B. D’Alessandro for a consultation, at 908-964-0102.