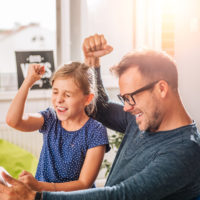 Even when couples create settlement agreements designed to eliminate future visits before the family part judge, flaws in the agreement can result in the need for court intervention. A recent opinion by the Appellate Division allowed a parent to seek a recalculation of his child support obligation where the couple’s marital settlement agreement (MSA) left ambiguities on the subject of how child support should be calculated. Learn about the case below, and contact a New Jersey family law attorney with additional questions about recalculating child support.

The case, titled B.H. v. C.M., centered on a couple who had crafted a somewhat-unusual MSA. The husband had recently been laid off from a job where he had earned an average salary of $240,000 when the MSA was created. In it, the husband agreed to pay $3500 in monthly child support. The husband also agreed to pay $3500 monthly in alimony for 48 months. However, the couple agreed that there would be a six-month temporary suspension of $3000 of the alimony obligation since the husband’s “cash flow was currently lower than marital levels.”

In the section of the couple’s MSA titled “income upon which alimony and child support was based,” it stated that, even though the husband was only earning $85,000 annually at the time, the alimony provided for herein was premised upon [the husband’s] average earned income of approximately $240,000 per year during the last three years of the marriage.” The MSA acknowledged that the couple had arrived at the amounts of child support and alimony “in a non-conventional way.” In a prior section, the MSA also stated that alimony could not be recalculated, even if the husband experienced “dramatic and substantial changes in income, of whatever nature, scope, or duration.” Alimony would terminate early if the wife remarried or moved in with a partner. Finally, the agreement noted that, if the husband sought a reduction in his alimony obligation within three years after the divorce, “the alimony obligation will be retroactively reviewed based upon the. . . income to [the husband] of $240,000.”

The husband’s alimony obligation ended in January 2015. The husband filed a motion to reduce his child support obligation from roughly $870 per month to $167 per month in 2017. He argued that this amount was justified based on his average income of $129,104 in the three years prior. He explained in his motion that his industry—medical device sales—had experienced a major downturn, and that despite a good faith search, he could not find a job that would result in the salary on which the alimony and child support were based. The motion also argued that he was not obligated to show changed circumstances, as he had a right through the MSA to seek a recalculation of his child support obligation when “alimony terminated” or “three years after their divorce.” The motion explained that the MSA “clearly indicated that the $240,000 would only be used at the time of modification for the review of alimony, not child support. The wife disagreed, arguing that the MSA made it clear that the husband had agreed to base both child support and alimony on the income of $240,000, regardless of changes to his income.

The trial court rejected the husband’s request. The judge explained that the husband had not submitted sufficient evidence to show that he had made a good-faith effort to find a job with a similar income, and that, since the husband had specifically agreed in the MSA to base his child support on the salary of $240,000, and not on his actual income at the time of the agreement, he had not demonstrated a significant change in circumstances.

The husband appealed this decision. He argued that the MSA called for child support to be reviewed upon the termination of alimony, and that the court should not have based its decision on whether the husband’s circumstances had changed significantly, as such decisions would otherwise be made under New Jersey law. That said, the husband also argued that he had in fact demonstrated a significant change in circumstances sufficient to warrant a hearing on the issue.

The Appellate Division sided with the husband and granted a hearing on the issue of whether child support should be recalculated. The court’s opinion explained that an “agreement that resolves a matrimonial dispute is no less a contract than an agreement to resolve a business dispute,” but that, when a contract is ambiguous, parties had a right to “illuminate the contract’s meaning through the submission of extrinsic evidence.” The court explained that determining whether the husband’s circumstances had changed meant that the court needed to establish the “point from which change can be measured.” Since the agreement left ambiguities about what income amount should be used as a basis for calculating child support, as opposed to alimony, the Appellate Division ordered that the parties participate in a hearing on the subject of the parties’ intent at the time that the MSA was created where each party could present evidence supporting their interpretation of the MSA.