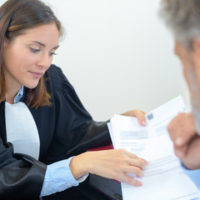 Judges’ opinions often include long passages about how courts are committed to enforcing written contracts between parties; these passages often come right before the judge explains why they won’t be enforcing duties imposed under the contract for one reason or another. In a recent case before the New Jersey Appellate Division, the judges affirmed a Family Part judge’s ruling that certain portions of a property settlement agreement (PSA) shouldn’t be enforced, but that others should. Contact a seasoned New Jersey family law attorney with questions about the division of marital property in a New Jersey divorce.

The recent case is titled M.F.W. v. G.O. The case centers on a dispute between a couple who divorced in 2003, when their daughter was five years old. The couple agreed in their PSA that each parent would contribute to their daughter’s college expenses “based on each party’s income and all other relevant financial circumstances in existence at that time,” and that the daughter would “apply for all loans, grants, aid and scholarships available to her, the proceeds of which shall be first applied to college costs.” The PSA also stated that the parents would have input in the daughter’s decision on where to go to school.

The daughter applied and was accepted to Georgetown University, where she began in the fall of 2016. The mother emailed the father about devising a plan to pay for the daughter’s college expenses and college prep courses, suggesting they exchange tax returns and stating that she would consider splitting college costs “equally.” Jane had applied for financial aid but qualified only for a small unsubsidized loan and nothing needs-based.

Having failed to reach an agreement with the father individually, the mother filed a motion to enforce the portions of the PSA related to college expenses. She requested that the father and mother pay 66% and 34% of the daughter’s college costs, respectively, and that she be reimbursed for her payment for college prep courses. The father claimed that the mother should herself apply for financial aid or be held responsible for those amounts if she did not. He refused to reimburse college prep costs, sought modification of his child support, and demanded information on trust funds that he claimed the mother could access.

The trial court judge ordered that the father pay 70% of the daughter’s college expenses and that the mother pay 30%. The judge released the daughter “of any requirement to apply for or obtain loans and/or other financial aid” throughout her time in college, explaining that she “should not be bound to a contract which she is not a party to,” and because the parents “have a legal obligation to support” their daughter. The judge went so far as to call the portion of the PSA requiring the daughter to apply for aid “repugnant” and not to be enforced. The judge also ordered that the father reimburse a portion of the college prep costs that the mother had incurred and reduced the father’s child support obligation. The judge did not consider it significant that the father did not have input into the daughter’s choice of school.

The father appealed this decision, but the Appellate Division upheld the lower court’s ruling. The Appellate Division explained that, while a PSA generally should be enforced, courts may choose not to enforce a PSA if “circumstances have changed in such a way that strict enforcement of the agreement” wouldn’t be fair to all parties. In this case, the court pointed out that the father now makes almost three times what he did when the PSA was first created, and the mother’s income has also increased. Since the parents have an obligation to pay for their daughter’s college expenses, and they were more than capable of doing so, the court found it “unfair and unjust” that the daughter would be obligated to apply for loans and financial aid. The Appellate Division affirmed this ruling, finding no reason to require the daughter to apply for any funding that she would be required to repay in the future, especially where her parents had agreed in the PSA to pay for her college expenses.

If you’re in the midst of a conflict with a co-parent and need experienced legal help in resolving these issues, contact the seasoned and dedicated New Jersey family law attorney John B. D’Alessandro for a consultation on your case, in Union at 908-964-0102.