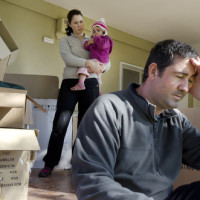 Last month the Appellate Division of the Superior Court of New Jersey heard the appeal of a father seeking to keep his ex-wife from relocating from Bridgewater Township in Somerset County down to Egg Harbor Township in Atlantic County, 115 miles away. The lower court had denied the dad’s motion, and the appellate division affirmed.

The couple in the case of Clemas v. Clemas were married in 1998. They had two children in 2003, and in 2012 obtained a dual judgment of divorce from Bed & Board. This type of “limited divorce” is basically like a legal separation.

The divorce judgment incorporated the parties’ marital settlement agreement, which gave the parents joint legal custody but designated the mother as the primary residential parent for the purpose of child support. The agreement also said that Bridgewater was the desired school district so long as one party was domiciled in the district, but this provision would be null and void when either party applied to convert the Divorce from Bed & Board into a Final Judgment of Divorce.

In 2014, the mother filed a motion to convert the divorce. Dad found out from the kids that mom was planning to relocate, so he cross-moved to stop the relocation. The judge converted the divorce and denied dad’s motion, and this appeal followed.

The court held that under New Jersey law, a primary residential parent is entitled to relocate within the state as a matter of law, and nothing in the Marital Settlement Agreement altered that fact. In fact, a parent with primary residential custody doesn’t even need to apply to the court in order to relocate in-state. It is only an out-of-state removal that requires court approval under New Jersey Statutes section 9:2-2.

In order to object to the relocation, dad would have to show how the move infringes on the best interests of the children, but he did not do that here. In fact, the Marital Settlement Agreement itself contemplates a future relocation by stating that Bridgewater is the school of choice only until a party converts the divorce to a final judgment, implying that one or the other may move out of district at that time.

The in-state move in this instance is considerable and basically takes in the length of the state. It is possible for a parent with joint residential custody to object to an in-state relocation by showing that the move is not in the best interests of the child, interferes with parental rights, or that there is no good faith reason to move. Unfortunately for the father in this case, he failed to make that showing.