Contempt of Court in a New Jersey Family Law Case 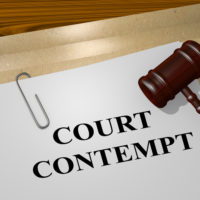 New Jersey courtrooms use court orders to give effect to a judge’s decisions. Once formally entered and recorded, these orders are legally binding on the parties, and serious consequences can result when orders aren’t followed. Consequences can range from fines and fees to time spent in jail. Read on to learn more about enforcement of family court orders by holding a party in contempt, and the sorts of sanctions that can result from being held in contempt.

When a party bound by a court order doesn’t comply with that order, another person bound by the order can seek to have it enforced, and can request that the non-compliant party be held in contempt if they fail to comply. A common example of when you might seek to have an order enforced is if your ex has not continued to make child support payments in the amount ordered by the court. Courts will generally offer non-compliant parties ample opportunities to comply with these orders before imposing sanctions, and the severity of sanctions issued will escalate depending on the circumstances. For example, if a parent is behind on child support payments but explains to the court that they have been noncompliant due to having lost their job, the court will be more sympathetic than where the noncompliant party has the economic ability to pay but has repeatedly ignored requests made by the receiving parent and court to do so. Judges do not look kindly on this sort of willful noncompliance. The consequences of being held in contempt for willful failure to pay child support can include suspension of a driver’s license or professional licenses, seizure of property, or, in rare cases, jail time.

Orders to pay child support are only one form of order for which violations could result in being held in contempt. New Jersey family judges have held parents in contempt for interfering with the visitation time of the other parent, or refusing to hand over custody of the child when required. Courts have also held parties to a divorce in contempt for failing to comply with aspects of the final judgment of divorce, such as transferring title of a home out of the name of the spouse who no longer lives there. An experienced New Jersey family law attorney can assist you in filing a motion in aid of litigant’s rights, requesting that the court enforce the existing court order against the noncompliant party.

For assistance with enforcing a court order in New Jersey, contact the compassionate and effective Union family law attorney John B. D’Alessandro for a consultation, at 908-964-0102.