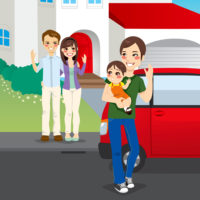 There is no one-size-fits-all custody arrangement and visitation schedule that works for every family. During settlement negotiations or a trial for divorce, each family must arrive at the arrangement that works for them and, most importantly, promotes the best interests of the children involved. It’s important to know about the many options that parents have in how they’ll decide to share custody after a split to ensure that you can, with the help of skilled legal help, request the arrangement that best works for you and your family.

Barring extraordinary circumstances, such as physical abuse, a violent criminal history, substance abuse, or neglect, most New Jersey courts will allow parents to have joint physical and legal custody of their children. In other words, both parents will have physical custody of their child around half the time and will share the right to make important decisions about their child’s health, education, and religious upbringing. Parents who have joint physical custody often exchange custody each week, half-way through the week, or even once a month.

Finding a visitation schedule that works

For many families, dividing physical custody equally isn’t feasible or desirable. One parent may have moved far away for a job after the divorce, making transporting the child to and from school impossible. In other cases, a parent may have a job that requires them to work nights. In these cases, parents may consider providing for visitation that occurs only on weekends, or allowing one parent to have extended and uninterrupted custodial time over the summer, making up for time missed during the school year.

Some parents are uncomfortable with the idea of allowing their children to spend time alone with their co-parent, so they request that the family court judge appoint a professional to supervise visitation between their ex and child. Supervised visitation may be granted in cases where the parent has had a history of domestic abuse, substance abuse, or other criminal behavior, but the court believes that, with supervision, the parent and child can begin repairing their relationship through visitation.

Include details about visitation in your order

Whatever arrangement you choose for sharing custody, be sure that the arrangement is described in detail in the final court order. Be sure that your attorney advocates to include language spelling out exactly how many days per week or month to which each parent has a right to custody, and, if possible, which days of the week or month custody exchanges will occur.

If you’re in need of seasoned legal help with a custody dispute in New Jersey, contact the experienced and knowledgeable Union family law attorney John B. D’Alessandro for a consultation, at 908-964-0102.