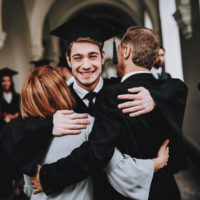 In a 2010 case before Ocean County Family Part Judge Lawrence Jones , the court was asked to determine what right a non-custodial parent who provided funds toward his child’s college tuition had to evidence of the child’s class enrollment and grades received. The court found that the parent was entitled to that information, and that both the custodial parent and the child were obliged to ensure that he received it.

The case, titled Van Brunt v. Van Brunt, centered around a couple who had divorced in 2008 after having two children together. The couple’s marital settlement agreement stated that the mother would serve as the parent of primary residence, but that the couple would share custody. The mother agreed to consult with the father on questions regarding the children’s education, and the father agreed to pay child support, with additional contributions to be made toward college expenses in an amount to be determined later. The couple also agreed that their children would not be considered emancipated until after they had completed a four-year course of study at a university.

By 2010, the couple’s 21-year-old daughter had begun attending college full-time. The father filed a motion at that time seeking to compel the mother to provide the daughter’s college records to him, and, failing that, to emancipate his daughter, whose status as unemancipated rested on her being enrolled in school full-time. The court ordered the mother to provide an official course list that included credits, copies of the daughter’s report card, and verification of enrollment from the university. While the mother at first failed to do so, she eventually provided a transcript which showed that their daughter had attempted a full load of courses at a local community college, but failed a number of classes. Since it seemed possible that she had passed enough classes to have received an Associates Degree, the mother was ordered to produce evidence of how many units the daughter had earned, and what illness or injury caused her to fail a number of classes, as she had claimed. The daughter also became obligated to provide ongoing evidence that she was enrolled in and passing 12 units each semester. If these conditions were not met, the daughter would be emancipated. When neither the mother nor daughter provided the requested documents, the father again requested that the court order the women to comply with its order. The mother argued that she had tried to obtain the information, but, since the daughter was 22 years old, she was unable to obtain these documents on her own due to university privacy laws.

Judge Jones began by noting that it was unacceptable for the father to have had to request this information on so many occasions, since the daughter’s unemancipated status (and thus his obligation to pay child support) was contingent on her enrollment in school. The judge noted that, while federal law offers privacy protections to college students, court-ordered disclosures are exempt from these privacy protections, and the school was free to release these records in compliance with a court order, without the daughter’s written authorization. Judge Jones ruled that the payor father had a right to evidence confirming his unemancipated daughter’s college enrollment status, and that if the child did not provide that information, she would not be entitled to receive support or funds toward college expenses. Likewise, since the mother still received child support, she also had a duty to provide these records to the father.

If you are a New Jersey parent and need assistance creating a marital settlement agreement or representation for a court dispute over custody of your children, contact the compassionate and knowledgeable Union family law attorney John B. D’Alessandro for a consultation on your case, at 908-964-0102.