Cohabitation could be the basis for changing alimony, even if not spelled out in a New Jersey Property Settlement Agreement 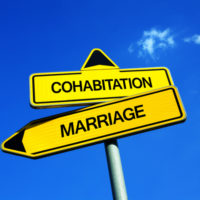 The New Jersey Appellate Division recently issued a decision in response to an ex-husband’s request to modify or terminate alimony based on his wife allegedly living with a new partner, as well as other changed circumstances. After receiving a denial from the trial court, the Appellate Division granted the husband’s request for a hearing on whether he was entitled to have his alimony reduced or terminated, a decision issued in the case titled Kafader v. Navas.

The couple at the center of Kafader v. Navas divorced in 2000 after a 17-year marriage. The property settlement agreement (PSA) entered by the spouses obligated the husband to pay permanent alimony to the wife “until the death of either party or the remarriage of [the wife].” On three previous occasions, the husband had requested that his alimony payments be reduced or terminated, but all of these requests were denied on the basis of insufficient evidence or failure to file a complete motion.

In June 2016, the husband again requested a modification based on changed circumstances; specifically, that he had experienced a reduction in income based on his health, and that his former wife was cohabiting with a romantic partner. This time, he supported his request with 15 years’ worth of tax returns, doctors’ notes describing his failing health and inability to work, and photos which allegedly documented the wife and her new cohabiting partner.

The wife responded by claiming that the documentation that the husband provided was insufficient to prove his income had changed, as he was an independent contractor and could have misrepresented his income with the documents he’d provided. She also denied living with the man depicted in her husband’s photos.

The trial court denied the husband’s request without holding a hearing. Among other things, the court pointed out that the couple’s PSA did not mention cohabitation as a circumstance that could prompt termination of the husband’s alimony, only remarriage and death. The court determined that, as a result, it was not authorized to modify alimony on that basis. The trial court declined to hold a plenary (full) hearing at which the parties could present additional evidence. The husband appealed this decision.

The Appellate Division disagreed and ordered that the trial court hold a plenary hearing on the husband’s request to modify or terminate alimony. The Appellate Division explained that courts always have an ability to review and modify alimony obligations based on a change in the spouse’s circumstances. One common reason for a change in circumstances that would prompt a reconsideration of alimony duties is for the spouse who receives alimony to begin cohabiting with a romantic partner who helps support the household. Unless a PSA specifically stated otherwise, the opinion explained, courts have the right under New Jersey law to reconsider an alimony obligation when an alimony-receiving spouse begins cohabiting with someone new.

The Appellate Division did note, however, that the evidence of cohabitation that the husband had presented was not sufficient to prove his case; namely, photographs showing the wife with a new romantic interest and hearsay from third parties stating that she was living with someone. The Appellate Division ordered the trial court to hold a hearing where both spouses would have an opportunity to present evidence for and against the termination of alimony.

If you’re facing a dispute over alimony, child custody, or a divorce in New Jersey, contact the skilled, knowledgeable, and seasoned Union family law attorney John B. D’Alessandro for a consultation on your case, at 908-964-0102.