Can a Bad Divorce Get You Fired? 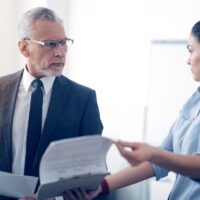 No one should be embarrassed about getting a divorce. Divorces are just a part of modern life. Many people worry about how the divorce will affect the rest of their lives, socially and professionally. Some people are concerned that a divorce, especially if it becomes ugly, can affect their career. While you cannot lose your job simply because you went through a divorce, your conduct during a divorce may still come up in your performance review. Continue reading for a discussion of how your divorce may and may not affect your career, and call a dedicated New Jersey divorce attorney for help with a divorce or family law matter.

You Cannot Be Fired Just for Getting a Divorce

If you are worried about your employers finding out about your divorce, you can relax: Under New Jersey law, you cannot legally be terminated because you got a divorce. We know this because an employer actually tried that.

In no uncertain terms, the Supreme Court held that firing an employee (or taking other discriminatory actions against them) because they are divorced or divorcing is a clear violation of the NJLAD. The NJLAD “prohibits an employer from discriminating against a prospective employee or a current employee because they are single, married, or transitioning from one state to another.” To the extent your concerns are professional, you do not have to worry about your job as a result of your divorce.

Your Conduct During Divorce Can Get You Fired

We’ve talked before about the things you should and shouldn’t do during your New Jersey divorce. Some bad behavior during divorce can affect more than just your divorce case. If your divorce is causing you to have performance issues at work, for example, then you might be subject to disciplinary action. If you are missing days of work or failing to perform your job duties, the fact that you are divorcing will not shield you. In that same New Jersey Supreme Court opinion, the Court noted that the NYLAD “does not prohibit an employer from firing an employee who is engaged in a dispute — marital or otherwise — that has become so contentious that it interferes with his or other employees’ ability to carry out their work.”

Similarly, engaging in negative public conduct relating to the divorce may affect your job security. Many employment contracts have a “morals” or “publicity” clause, under which bad conduct such as criminal activity can be a terminable offense if it reflects poorly on the company. Regularly making vitriolic social media posts, for example, or publicly harassing a spouse, may come back to and reflect poorly on a company. If a company feels that an employee is creating a public relations issue, then they may be terminated for those reasons, even if they are connected to a divorce. All the more reason to avoid social media posts about a pending or recent divorce.

If you need seasoned and professional legal help with property division, child support, alimony, divorce, or other family law matters in New Jersey, contact the Union offices of family law attorney John B. D’Alessandro at 908-964-0102.