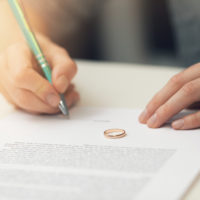 A recent case examined by the New Jersey Appellate Division is a cautionary tale regarding why it is important to have all the details of your divorce settlement agreement in writing, and why you should rely on the opinion of your attorney when entering into a contract.

In the case titled Corman v. Corman, the couple at the center had been married in 1994 and divorced in 2013 after having two children. The couple had agreed to a marital settlement agreement, and the judgment of divorce had been entered without contest. However, the wife returned to court a year later claiming that her participation in the marital settlement agreement had been obtained using fraud. She claimed that her husband had convinced her to divorce because the properties he owned were “on the verge of collapse,” and that he didn’t want to destroy her credit by filing for bankruptcy while they were still married. The wife claimed that her husband told her that the family would stay together after the divorce, and that he severely underrepresented the value of the properties he owned to his wife. The wife requested that the court set aside portions of the marital settlement agreement based on fraud and other inequitable conduct, and that she had relied to her detriment on the husband’s misrepresentations about the value of his properties.

The trial court refused to throw out the marital settlement agreement, and the Appellate Division affirmed this decision. The trial court judge noted that oral side agreements not represented in the written contract couldn’t serve as evidence of the parties’ true intentions regarding their settlement. The judge noted that the wife’s testimony about a side agreement that the family would stay intact seemed to run in direct opposition to the wife’s signature on the marital settlement agreement, and that she hadn’t presented evidence that she was forced to sign the agreement in order to keep the family together.

The wife appealed the trial court’s decision, arguing that the court should have thrown out the agreement and conducted a new equitable distribution analysis of the couple’s property. The wife had testified that, when the divorce agreement was first created, her attorney had warned her that it was a “bad deal” and that she shouldn’t sign it, but she signed it anyhow. The court pointed out in its opinion that, rather than strengthening the wife’s argument that the agreement should be tossed out, this fact weakened it. This incident showed that the wife had warning that the settlement wasn’t fair from someone she should trust to be looking out for her best interests, but that she nevertheless accepted it. The court noted that an important tenet of contract law states that parties to a contract cannot rely on “secret, unexpressed intent[ions] of a party. . . to vary the terms of an agreement.” Both parties and courts must be able to rely on the written contents of a contract, since oral agreements are frequently impossible to prove and could only sow confusion and uncertainty if they could serve as evidence of a party’s true intentions. The trial court’s decision was affirmed on appeal.

If you are considering divorce in New Jersey, seek legal counsel who will ensure that your interests are protected and that a division of property is fair and equitable to you and your children by contacting the Union family law attorney John B. D’Alessandro for a consultation on your case, at 908-964-0102.