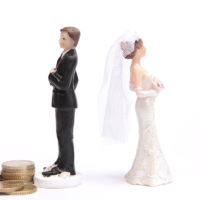 In a recent case before the New Jersey Appellate Division, the judges technically ruled against a spouse who sought to terminate an alimony obligation where the other spouse had remarried in every sense but the legal one. However, the court’s opinion offered helpful suggestions on how the paying spouse might nevertheless terminate her alimony obligation.

The couple at the center of Sloan v. Sloan divorced in 2014 after 24 years of marriage. Their Matrimonial Settlement Agreement (MSA) provided that the husband would receive permanent alimony until either his death or remarriage. The alimony was slated to begin in April of 2015.

In October of 2015, the husband and his girlfriend held what they called a “civil commitment ceremony.” The ceremony made use of an officiant who referred to the pair at the conclusion of the ceremony as “husband and wife.” When making arrangements with the officiant, the husband’s girlfriend said they were “NOT getting married via a marriage license. We want to be married under the eyes of God.” That said, both the husband and girlfriend posted on social media about their ceremony by referring to it as a “marriage,” and calling one another “husband” and “wife.”

The wife learned of the ceremony and requested that her alimony be terminated under the terms of the MSA. The husband claimed that he had not remarried as defined by the MSA. In a subsequent hearing, both the husband and his girlfriend testified that they were not legally married, and thus that alimony should continue, but the trial court judge disagreed. New Jersey judges can sense when a litigant is following the law only in its most literal sense to avoid an undesirable outcome, and they have little tolerance for it. In fact, the trial court judge ruled that the husband and his girlfriend had:

“done everything to be married except for issue the certificate [sic] in an attempt to avoid losing alimony, and I find that to be intentional. And I don’t think that’s equitable and I don’t think that that’s fair. . . . I don’t have a marriage whatsoever. But I have someone taking all the steps there are to be a married couple just to solely twist or abuse the language, what a “marriage” is. And that I’m not going to permit in my courtroom.”

The judge terminated the wife’s alimony obligation, and the husband appealed.

However, the Appellate Division pointed out that, even though the alimony obligation might not terminate, the amount that the wife is obligated to pay could be reduced. While some couples include what’s known as an “anti-Lepis” provision in their MSAs which would prevent a modification of the amount of alimony owed, this couple had not included one. The opinion noted that the wife would have an opportunity to show that her former husband’s economic circumstances changed when he began cohabiting with his girlfriend in order to reduce her alimony obligation. The judges also pointed out that, in the intervening years since the MSA had been created, New Jersey’s alimony laws had changed to allow payor spouses to terminate their alimony obligation when a former spouse begins cohabiting with a new partner, even if the alimony-receiving spouse’s financial status hasn’t changed. The judges concluded their opinion with the helpful suggestion that the wife make this argument when the parties return to the trial court to discuss a modification to the wife’s alimony obligation.

For assistance with a case before the New Jersey Family Part, such as a divorce or disputed custody matter, contact the effective and knowledgeable Union family law attorney John B. D’Alessandro for a consultation, at 908-964-0102.