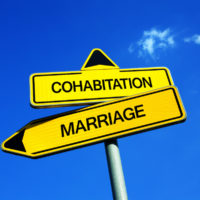 Alimony is a typical part of many New Jersey divorces, and the duration for which alimony is owed can be lengthy when the spouses were together for a long period of time. But alimony requirements can change when there is a change in circumstances for one or both parties involved. A common situation leading to modification of an alimony order involves the recipient spouse becoming romantically involved with and marrying a new spouse. When marriage or “cohabitation” with a new partner occurs, the previous spouse is typically relieved of alimony obligations in order to avoid requiring one to pay for the expenses of an ex-spouse’s new spouse. A New Jersey appellate court recently addressed exactly when a new relationship has reached a level sufficient to merit modifying an alimony order. Read on for details on the case, and contact a knowledgeable New Jersey alimony attorney with any questions.

“Cohabitation” Requires More Than Just an Intimate Relationship, but Not Actual Marriage

The case titled L.R. v. R.R. involves a divorced couple who were married for over ten years and share two children. Upon their divorce in 2013, the court ordered “Richard” to pay “Lisa” semi-monthly alimony until either party’s death, Lisa’s remarriage, or another sufficient change in circumstance. The marital settlement agreement listed as one potential change in circumstance meriting review of the support obligation as Lisa’s “cohabitation with a person unrelated by blood or marriage . . . for a period of six months.” In 2015, Richard filed a motion to reduce or terminate the alimony obligation due to Lisa’s alleged cohabitation with [Gary].

Richard provided evidence that Lisa had been “cohabitating” with Gary. The question for a court in evaluating whether cohabitation merits terminating alimony is not whether the recipient is now financially self-sufficient such that there is no more need for alimony, but rather whether the recipient has entered into a new relationship that is sufficiently serious as to replace the marriage between the former spouses. Richard showed that Lisa had dated Gary prior to Lisa and Richard’s divorce. Richard provided evidence that Gary retained a post office box in Columbus, where Lisa resided, from 2011 through 2015, provided a report from a private investigator that Gary’s car was generally parked at Lisa’s residence for several months during 2015, and other evidence such as Facebook posts showing very strong feelings between Lisa and Gary and indicating that Gary was living with Lisa at the time. Moreover, the court reviewed evidence that Lisa was subsidizing Gary’s expenses; she had been providing so-called “loans” to Gary without disclosing them in discovery during the divorce proceeding, which the court determined was simply Lisa giving money to or paying expenses on behalf of Gary for several years.

The court determined that Lisa and Gary had been cohabitating since 2011, sharing expenses, household chores, vacations, and otherwise holding themselves out to their friends and family as a couple. Tracking the definition of “cohabitation” in New Jersey’s family law, the court determined that the “relationship between [Lisa] and [Gary] constitute[d] a long-standing, committed personal relationship tantamount to a marriage” which “supplanted the former marital life style which [Richard’s] alimony payments were intended to maintain.” Living together alone is not enough, but cohabitation is satisfied “when their relationship bears the generic character of a family unit as a relatively permanent household.” The court terminated alimony as of the date Richard’s original motion was filed in 2015, rather than the original date of cohabitation, although the court noted that alimony may be modified retroactively to the beginning of the new relationship.